Why call them fake news? Because they are.

Temperature. The left seems to be obsessed with it. No, not the global temperature, although they still flog that dead mule from time to time. The political temperature. They want you to believe pipe bombs and synagogue shootings are all the fault of President Trump. They’re not. And they use these mentally disturbed people to try and stifle his pointed concerns with inaccurate reporting in the media. Even Fox News has wondered aloud why the president won’t tamp down his criticism of ‘fake news.’ The reason is because fake news stories are one of the biggest threats to our country. 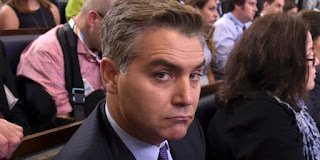 On the same day that Jim Acosta berated White House Press Secretary Sarah Sanders for not having the “guts” to name names in the fake news media, a commentator on his own network was saying that Donald Trump had “radicalized more people than ISIS.” Think about that statement for a moment. The insinuation was Trump is responsible for the pipe bombs and the synagogue shooting. He’s no more responsible than Bernie Sanders was for one of his campaign workers shooting Steve Scalise on a baseball field. And, by the way, the synagogue shooter hated Trump because of Jews in his administration. That alone should put to rest accusations of anti-Semitism against the president. But it won’t.


Even before the pipe bomber was caught, the liberals were using the hashtag MAGABomber on Twitter. No one used #BernieShooter when Scalise was shot. Why? Because we understand that mentally deranged people on either side are not representative of those they supposedly support.

Eric Holder has said, “When they go low, we kick them.” Maxine Waters has encouraged her followers to hound and harass people they disagree with “in a restaurant, in a department store, at a gasoline station.” She screams, “They’re not welcome anymore, anywhere.” And they talk about the political temperature.

When crazy people scale the White House fence and try to enter the mansion carrying a dangerous weapon there’s no call from the left to tamp down the rhetoric against Trump.

He has called the fake news media the enemy of the people, and they are. No, not all the media, and not every reporter at every left-leaning network. Those who pose as journalists, but in reality are activists, are doing the public a grave disservice. The reason Sarah Sanders didn’t take the bait from Jim Acosta and list the fake news media is because she would’ve been there all day.

Reporting that Trump instructed Michael Flynn to meet with the Russians before the election was fake news. In fact, the entire Trump/Russia collusion story has been fake news. After two years there’s nothing to show for it. George Papadopoulos was sentenced to 14 days in jail for lying to the FBI about communications with a Russia-linked professor. After meeting behind closed doors with Congress, it now appears the professor was set-up from the government to try and link him with Russia. Papadopoulos is now considering withdrawing his agreement with the government concerning his case.

Justifiably criticizing your opponents has no connection whatsoever with deranged people who resort to violence. For President Trump to refrain from pointing out what his opponents are doing wrong just because of some crazy people would be admitting that his words have some connection to their actions. They don’t.

If the mainstream media want to lower the temperature, they can start with telling the truth, the whole truth, and nothing but the truth about President Trump. If they want him to stop calling them fake news then stop running fake stories.