Once upon a time, back when I was younger and more naive, I believed that the voting process in this country was sacred. Sure, I was aware of the Chicago Machine, Tammany Hall in New York, and a few scattered, isolated incidents of ballot stuffing. Of course, I knew about the Klan and voter intimidation and poll taxes and other methods to rig elections. But I truly thought those were from a bygone era. 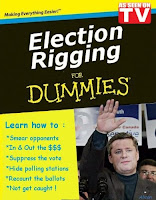 The recent revelations in the 2016 election have made it clear that election rigging is alive and well in the United States of America.


The James O’Keefe videos from Project Veritas prove beyond a shadow of a doubt that people will do anything they can to steal an election. These videos prove a concerted conspiracy to organize people and descend upon a state with illegal voters who employ techniques from registering and voting illegal aliens to registering and voting dead people.

The Chicago Machine, Tammany Hall, poll taxes, the KKK, and registering illegals and dead people to vote all have one thing in common. Democrats. That’s not to say that Republicans haven’t committed voter fraud, but the vast majority of it is by Democrats.

Yes, Donald Trump said some crass and offensive things when he didn’t know he was being recorded, but it’s crystal clear that the Access Hollywood tape was a weapon the Democrats held and deployed at a strategic time in this election. It’s also apparent that the parade of Trump accusers meant to fit nicely with the words on that tape were orchestrated and planned well in advance.

Obviously, the Democrats have had the tape since Trump announced he was running for president. It’s also obvious from the Wikileaks e-mails that Hillary Clinton and the Democrats wanted desperately for Trump to get the Republican nomination. That’s why they sat on the tape throughout the primaries. They fully expected to be 20 points ahead a month before the election. When they weren’t, they knew Donald Trump must be destroyed.

The allegations have been so over the top that they may have overplayed their hand. The countless accusations of public groping stretch credulity. It’s not as though no one had ever heard of Donald Trump. Had such conduct been commonplace the media would surely have gotten wind of it before now.

And what of the accusers? The woman who says she was groped on the airplane 30 years ago, it turns out, has been in a long property dispute with one of Trump’s golf courses. Many of the other women have turned out to be Democrat operatives and/or Hillary contributors and supporters. One woman was a reporter for People Magazine, for Pete’s sake. She was tasked with interviewing Trump. Don’t you think such a salacious story would’ve made the cover of that gossip rag had it been true?

We now have a very public view of an overt attempt to steal an election. This is no longer the stuff of the tinfoil hat crowd. It’s now all out in the open. The Wikileaks e-mails and the O’Keefe tapes prove it beyond a shadow of a doubt. But the scariest part is how the mainstream media ignore both. Time was when they were the watchdogs of these corrupt SOBs who were trying to steal elections. They are now their lap dogs.

Heaven knows that Trump is an imperfect candidate, but he is the rage against the machine. He is our only hope that the people can triumph over the evil that has infested our election process. God help us all if he fails.

Posted by Phil Valentine Show at 8:27 AM 3 comments:

Back from the dead

On Friday October 7, I would’ve sworn that Donald Trump’s presidential campaign was mortally wounded. The vulgarity of the leaked Access Hollywood tape seemed too much to overcome. The 48 hours between the release and the second presidential debate gave America a chance to let the issue marinate. All eyes were glued on Trump as he took to the debate stage to see how in the world he would overcome such an embarrassing revelation.

He got off to a rocky start. The odd way he held the microphone while one shoulder was higher than the other made him look nervous. Right out of the gate, the issue was thrown right in his face. Despite what many commentators said afterward, his response was contrite. He didn’t belabor the point but spent just the right amount of time on it. Then he moved on to what some would describe as an odd segue: ISIS. I had suggested he pivot to something more Trumpish, like building the wall or putting Americans back to work, but bringing up ISIS was fine. What he was doing was pointing out that there were far bigger problems to tackle than some ‘locker room’ chatter from 11 years ago.


I had hoped he would hold his tongue on the Bill Clinton sexual predator remarks and Hillary’s role in destroying the women who accused him, and he did. He waited until Hillary pounced on the issue to deliver a jab the Clintons have had coming for 20 years. The bewildered look on Bill Clinton’s face in the audience was priceless.

In all his years of abusing women and having Hillary clean up the mess by destroying lives, Bill has never had anyone with the guts to confront the Clintons head-on. Trump did, and to those of us who’ve waited two decades to see it, it was glorious.

Within 15 minutes of the debate, the tawdry audio tape was all but forgotten. Like Rocky Balboa, Trump took one body blow after another until Hillary had exhausted her arsenal, and then he unloaded on her. It was a thing of beauty.

CNN’s poll said Hillary won the debate but we all know the truth. Trump not only defused the audio tape issue, he destroyed her on every other issue that was brought up. He even left some things on the table for the next debate.

If he wants to win this election, he’s going to have to put a finer point on some of the issues that still are not clear to the American people. When asked by moderators who obviously are pro-actively working for Hillary what he’s going to do to make sure the rich are paying their ‘fair share’ of taxes, Trump needs to tell them and the American people the truth. According to the IRS, the top 5 percent of wage-earners pays 60 percent of the income tax. His question to Hillary should be, “How much of the tax burden do you want them to bear?”

On the issue of his own tax deductions, he needn’t point to Soros and Buffet as doing the same thing. Bill and Hillary wrote off $700,000 of capital gains losses just last year. It’s not on the same scale as Trump but the principle is the same. One doesn’t pay income tax unless one has a profit. You don’t pay taxes on money you lose. It’s something the American people will surely understand if it’s framed in those terms.

Trump’s campaign is miraculously back from the dead. Like Rocky, Trump now has to give us something to cheer for.

Is this all Hillary has?


In 2015, she and Bill carried over a loss of nearly $700,000, just like Donald Trump did, only on a smaller scale. The tax code is very complicated for sure, but there’s one thing that’s perfectly clear. You only pay taxes on profit. If you have a loss, you’re allowed to write that loss off against your profit, and sometimes for several years of profit until the loss is erased.

The New York Times was giddy with glee when they came into possession of Donald Trump’s 1995 tax return. Publishing stolen tax returns is a felony punishable by up to 5 years in prison. Chances are they’re in possession of more than just 1995’s returns. It’s very likely that they cherry-picked which year they wanted to publish. Remember what I always tell you. Media bias is not what they tell you, it’s what they don’t.

Hillary and the Times are banking on the ignorance of the American people when it comes to tax law. Seeing as how Hillary and Bill did exactly the same thing as Donald Trump, it’s impossible that her attacks are coming from a position of ignorance. She fully understands that losses are counted against profits. She’s just counting on your ignorance to win this election.

The irony in this so-called scandal is that Donald Trump was the only thing standing in the way of Alicia Machado losing the crown. “When you win a beauty pageant,” Trump told People Magazine at the time, “people don’t think you’re going to go from 118 to 160 in less than a year, and you really have an obligation to stay in a perfect physical state. We want her to stay as Miss Universe, and she is working on her problem.” Machado now claims Trump was body-shaming her by inviting the press into her workout sessions at the gym. What he was trying to do was turn an embarrassing situation for her and the pageant into a heart-warming lifestyle story of how one can overcome the struggles of weight gain that millions of people fight every day.

I’m certainly not going to sit here and claim that Donald Trump is perfect, but, good grief, are these the most important issues facing America today? You’d think so by the media feeding frenzy.

Need I remind you that four Americans died in Benghazi waiting for Hillary Clinton to send someone to help them? Have we forgotten that tens of thousands of e-mails were scrubbed from Hillary’s illegal private e-mail server to cover her tracks in a pay-to-play scheme involving the State Department and the Clinton Foundation? Not to mention her role in destroying all the women whom her husband sexually assaulted.

An overweight Miss Universe and Donald Trump writing off loses from a casino project are the least of our worries.