Jonathan Alter, the liberal pundit on BSNBC (one of the hundreds) said if the Republicans keep Congress “you can kiss democracy goodbye.” I sure hope so. We don’t live in a democracy. We live in a representative republic. Our founding fathers believed a democracy would be a disaster. The word “democracy” does not appear in the Declaration of Independence or the Constitution.

James Madison voiced his disdain for ‘pure democracy’ in the Federalist Papers. “Hence it is that such democracies have ever been spectacles of turbulence and contention; have ever been found incompatible with personal security or the rights of property; and have in general been as short in their lives as they have been violent in their deaths.” 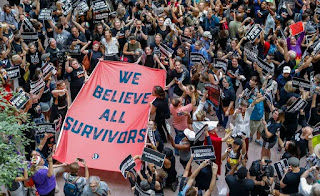 In short, a democracy is mob rule. I have long believed that those who use “democracy” as shorthand for a representative republic—on both sides of the aisle—meant no harm. Now I’m not so sure. If a democracy is mob rule then that appears to be exactly what the liberals these days crave. Mob has a negative connotation. That’s why CNN and BSNBC have banned the word from their airwaves when directed at the crazed liberal mobs that lost their minds over the Kavanaugh confirmation hearings. The networks childishly speak of “the m-word” as if it’s too offensive to even be uttered. They reserve the word for the white supremacists in Charlottesville, but not the Antifa thugs who confronted them. History has proven that President Trump’s condemnation of bad actors “on all sides” was spot on.


Mob rule is what minorities (in numbers, not race or ethnicity) resort to when they don’t get their way. Intimidation and threats are the tools of desperate people who see any chance of their being part of the power structure slipping away. That’s what we’re witnessing right now. Mobs descend on Republican politicians and cabinet members in public places in an attempt to scare them into submission. Some will ultimately acquiesce just to get their lives back. Compromise in the face of such thuggery is the most dangerous thing they can do.

The radicals who blur the lines of civility, decorum, and even gender are the rabble. They’re not the majority. Their only hope is fear. They have already succeeded to a large degree in changing the language through political correctness. The most chilling words are when someone says to you, “You just can’t say that anymore.” Anymore? So we used to be able to say it until the word Nazis grabbed the American media by the throat and threatened to brand them unhip and counter-progressive if they didn’t carry their water.

There’s more on the line on November 6 than just control of Congress. Much more. We have a chance to put a stake in the heart of much of what ails this country. Liberals in Congress are already proposing legislation if they win. They want to repeal all of Trump’s tax cuts and start writing checks to the poor. Corey Booker wants to give poor kids $50,000 when they reach adulthood. Instead of creating an economy where people can earn their own way they want to destroy that economy and hand out cash. Why? Because it’s the only thing that makes them relevant with voters.

Once the people realize they don’t need the government to succeed it’s over. Nothing quells an unruly marxist mob like success. And one more election just might do it.

So Jonathan Alter is right. If the Republicans manage to hold onto the House and Senate we could very well “kiss democracy goodbye.” And good riddance.

Posted by Phil Valentine Show at 8:59 AM