More than Kavanaugh, this is for November

The Democrats insist that the confirmation proceedings surrounding Brett Kavanaugh are not a trial. They could not be more wrong. But it’s not a trial of Brett Kavanaugh. This is the trial of the Republican Party writ large. That’s why I went against the grain of many of those on my side of this issue to call for an FBI investigation even before Sen. Jeff Flake did. This is seen as capitulation by many. In actuality it’s a necessary step toward justice. 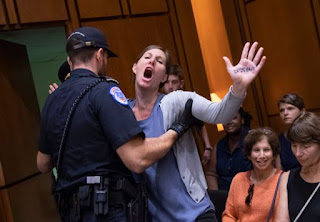 By noon on the day of the infamous dueling testimony of Dr. Christine Ford and Judge Brett Kavanaugh it was clear Kavanaugh’s nomination had taken a torpedo under the water line. To simply ignore Dr. Ford’s testimony or hope its impact would subside was folly. Her testimony was compelling. That’s not to say that the events as she described them were believable, but she, herself, was. How can that be? How can someone be lying and simultaneously believable? There are multiple explanations.


Some believe that something traumatic happened to Dr. Ford. Could it be something really did happen? If so, how could she so vividly remember the details of the layout of the inside of the house yet have no idea where the house was? I haven’t given up on the theory of false memory syndrome. We may never know. The inconsistencies of her testimony, however, did not erase the doubt about Brett Kavanaugh in many people’s minds.

Kavanaugh’s testimony was equally compelling. The left attacked him for being so forceful, but if you had been accused of the atrocious crimes he was accused of you would lash out too. Kavanaugh’s testimony may have tilted public opinion back toward him, but it did not undo the damage that had been done that morning by Dr. Ford’s testimony. So why is public opinion so important? Because this is not just about another seat on the Supreme Court. This is about November. And that’s why Republicans should not only have welcomed an FBI investigation, they should have insisted on one.

You lawyers know testimonial damage when you see it. Kavanaugh took a direct hit, and thus so did the Republican Party. When such damage is done you don’t simply clean up the debris and move on, you have to repair the damage.

What will an FBI investigation accomplish? If you’re a Republican you hope it accomplishes two things. First, it must corroborate what the Senate Judiciary Committee already uncovered. That being that Dr. Ford has one memory of the night in question, the witnesses she identified have an entirely different account. In other words, it’s not he said/she said, it’s she said/they said. The second thing the Republicans hope to accomplish is to get the FBI’s seal of approval stamped on the facts as we know them. Peter Strzok notwithstanding, the majority of Americans still have a tremendous amount of faith in the FBI.

The Democrats already are learning this can blow up in their faces. A recent poll in Missouri shows half the voters are now less likely to re-elect Democrat Claire McCaskill because of her opposition to Judge Kavanaugh. Her GOP opponent has slipped ahead by two points. In Tennessee, senate candidate Phil Bredesen is afraid to take a side. This is not quite going as the Democrats had envisioned.

If Republicans allow Lindsey Graham to make a point-by-point presentation of the FBI’s findings to the Senate just prior to the vote then this thing’s over. If several Democrats end up voting in favor of Judge Kavanaugh’s confirmation then so, perhaps, is November.