Brace yourself for Reconquista

First, what is a reconquistador? You must first understand what the modern Reconquista movement is all about. Reconquista means reconquest. Many south of the border believe the American Southwest was stolen from them. They want it back. Mexico obviously doesn’t have the military might to do it so their plan is to flood as many people as they can into the region and vote it back to Mexico. 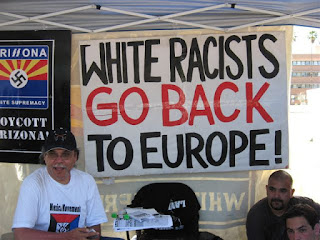 
Mexico had only gained its independence from Spain in 1821 so they were eager to hang on to every acre of land they could. In April of 1846 the Mexican army invaded the United States in the new state of Texas. We declared war on Mexico the following month and the Mexican-American War thus began.

We drove the Mexican army all the way back to Mexico City and in 1848 they were defeated. We agreed to pay them $15 million for the physical damage of the war and for the disputed territories. We also agreed to assume another $3.25 million in debt the Mexican government owed United States citizens. When the dust settled the Mexicans had lost over a third of the territory they had when they won their independence from Spain just 27 years prior. They were not happy.

To add insult to injury, just a year later, in 1849, something happened in California, a new territory we had just won and bought from Mexico. Gold was discovered. That really hacked them off. Thus was born the modern Reconquista movement.

Now, if you’re prone to believe this is just a conspiracy theory I invite you to do an Internet search and see for yourself. The stated goal of the reconquistadors is to take back the American Southwest for La Raza, the race. They mean the race of people in Mexico, which is not technically a race, but you get the picture. The plan is to flood the Southwest with enough people to take over the area politically and cede it back to Mexico. You may think this is far-fetched but it’s not. California is already 40 percent Hispanic. Same for Texas.

That’s certainly not to say that every Hispanic is somehow suspect and not loyal to the United States. Frankly, it’s hard to know how many Hispanics are part of the Reconquista movement. We must simply take those who are at their word. Mario Obledo, a La Raza lawyer and Reconquista leader said, “California is going to be a Hispanic state. Anyone who doesn’t like it should leave.” A professor in LA suggested Latinos needed to speak in code so non-Latinos wouldn’t catch on.

Once you research the Reconquista movement you’ll see a lot about Aztlan. According to Aztec legend, that’s the rightful land of the indigenous peoples of Mexico. It includes the American Southwest. They refer to it as their “occupied homeland.”

Remember what you read here. When the next wave of illegal aliens hits the southern border you’ll know why. La Reconquista is on.