It's time somebody put America in perspective for the snowflakes

I don’t know what you did on the recent Independence Day holiday (unless you had to work). I had all sorts of bold plans to do some bush hogging or clean up the garage. I sat down in front of the tube around nine in the morning and came across a History Channel miniseries that was released in 2010 called ‘America: The Story of Us.’ I actually had the whole series on DVD, but I had never gotten around to watching it. I was about a third of the way through the first episode when my wife joined me. Next thing I know it’s early evening and we’re finishing up episode eight. 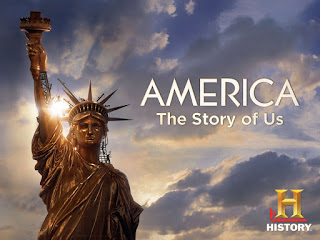 After we finally decided to turn it off, I sat there reflecting on what I’d seen. We had been taken from the settlement at Jamestown through the Revolutionary War, the Industrial Revolution, the Civil War, Reconstruction, and the Gilded Age. We saw the good, the bad, and the ugly. We saw the slaughter of the Indians. We saw the enslavement of Africans. We saw the connection of east and west by the railroad, the invention of the lightbulb that lit the darkness, the discovery of how to make steel affordable thus ushering in the age of the skyscraper.


And we hadn’t even gotten to saving the world from Nazi domination or putting a man on the moon.

I was sharing my reflections with one of my sons, and he commented that any time the greatness of America is brought up in conversation his liberal friends say, “What about the Indians? What about slavery? What about the internment camps of World War II?” There’s no denying all of that is bad, but does the bad outweigh the good? It’s not even close.

I know this is a bold statement but here goes. No matter who you are—no matter what ethnic or racial or religious background—you are undoubtedly better off because of America. I was discussing this on my radio show and a guy called in and said, “Tell that to the Indians.” OK, I will. No matter the brutality that befell your people many years ago, you are better off today as an Indian living in America than you would be had the Europeans never dawned these shores. The alternative is living in a teepee somewhere in the middle of Kansas. If you’re black the alternative is living in a hut somewhere in Timbuktu. On the UN’s top 10 list of the poorest nations on Earth, all of them are in Africa.

Again, that’s not to excuse the slave trade or the Trail of Tears. We can’t change history. What we can do is appreciate our place in it. My genealogy tells me my ancestors came from England, Wales, and Ireland. Pretty cool places to live, but I’m certainly better off because my ancestors decided to move here.

Countries are like people. There’s no such thing as a perfect country. They all have their histories. They all have things they’re not too proud of. However, we judge countries in their totality, not by cherry-picking the negative things we want to highlight.

America ain’t perfect, but it’s a sight more perfect than 99 percent of the other places on Earth.