The real story of Trump and Putin in Helsinki

The news media went hysterical over President Trump’s comments at a press conference in Helsinki after meeting with Russian President Putin. It’s instructive to first examine what it is the president actually said.

What got the media stirred was this answer to a question about Russian meddling in the election. Trump said, “All I can do is ask the question—my people came to me, Dan Coats came to me and some others, they said they think it’s Russia. I have President Putin he just said it’s not Russia. I will say this, I don’t see any reason why it would be but I really want to see the server but, I have confidence in both parties.” 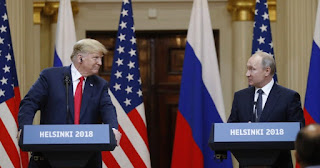 The Trump haters seized on that line of “both parties” and spun it that Trump was trashing our intelligence services. Keep in mind this is while Congress is investigating the possibility that several FBI agents were involved in a plot to first block his election to the presidency and then bring him down once he won. It’s important at this point to break the issue of Russian interference down into two distinct categories.

First, there’s no doubt that the Russians have been buying ads on platforms like Facebook to sow discontent in the country. What is not widely reported is they bought ads both pro-Trump and anti-Trump. They bought ads both pro-Hillary and anti-Hillary. They play both sides of the Black Lives Matters issue as well as Texas and California secession movements. In other words, the Russians take the opportunity to drive the wedge deeper on any issue that divides us. Why? Nobody really has a good answer. There could be a geopolitical strategy to topple us as the world’s superpower. It could be as simple as Putin’s hatred for America. Whatever it is, they’re certainly active on every side of the issues.

In the indictment of the twelve Russians unsealed recently by Robert Mueller’s team they contend that the Kremlin-linked Internet Research Agency set up shop to interfere with the U.S. presidential election in the spring of 2014. That was over a year before Donald Trump jumped into the race. It is inconceivable that such an operation was devised to get Trump elected president.

But it’s the second part of this equation that Trump is questioning. The part about the Russians hacking the DNC servers, or as the left-wing media like to say it, “hacking the election.” There’s no evidence at all that the Russians or anybody else “hacked the election.” Whatever the Russians did had no bearing on the outcome of the election. That’s one of the reasons why Trump is so defensive. The left is trying to convince the American people that his presidency is illegitimate because the Russians got him elected. That is utter bovine scatology.

The real issue is the DNC server itself. This is the point Trump was making when he said, “I really want to see the server.” Something most Americans don’t even know is the FBI has never examined the DNC server that was supposedly hacked. How incredible is that? The whole investigation hinges on testimony from a company, CrowdStrike, hired by the DNC to say the server was hacked. Until our intelligence agencies have actually examined the server themselves how on Earth can they definitely say who hacked it, or if it was hacked at all?

That is the point Trump was making in Helsinki, and the left-wing media chose to ignore the real story in favor of flogging the dead mule of Trump-Russia collusion.