Baghdad is no Benghazi

No sooner had protesters attacked the U.S. Embassy in Baghdad than libs took to social media to call it Trump’s Benghazi. The funny part is, unlike Benghazi in 2012, this actually was a protest that got out of hand. President Trump didn’t blame it on some video of Mohammed. He placed the blame squarely where it belongs, in Tehran. 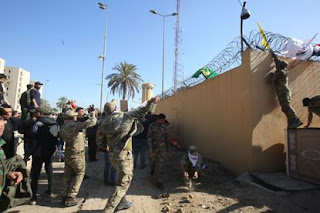 I love the fact that the Trump-haters are comparing this to Benghazi. It gives us a chance to compare and contrast. The comparison is both compounds were attacked. The contrast is in Baghdad we fought back against the attack while in Benghazi President Obama left our people to die. Benghazi was never a protest that got out of hand. It was a planned terrorist attack. Baghdad appears to be a protest in response to our airstrikes on a militia group in Iraq backed by Iran. Benghazi was simply a terrorist attack by Muslim extremists. Muslim extremists appear to be at work in Baghdad, but there’s no indication that it was a concerted terrorist attack. If that information changes it’s doubtful you’ll see Trump’s national security advisor make the Sunday news show rounds to blame it on a video.


Right after the attack, I was on NewsmaxTV to talk about the political ramifications for President Trump. Some, including Pat Buchanan, have posited that Trump could lose the election over Iran. With all due respect to Mr. Buchanan, that’s not likely. You see, Donald Trump understands foreign policy better most any other president in modern times. He knows full well that putting boots on the ground in Iran is not an option. Remember when he told Syria we were going to make them pay for any chemical attacks and people screamed that Trump was going to get us into another war? What did he do? He hit ‘em hard.

For those of you who complain about Trump’s tweets, you can pretty much sum up his foreign policy by how he manages his Twitter account. Remember the line delivered by Sean Connery in ‘The Untouchables?’ “They pull a knife, you pull a gun. He sends one of yours to the hospital, you send one of his to the morgue.” That’s the Trump way!

In this tit for tat we’ve got more tat than Iran has…well, you know what I mean. They can’t possibly win. An escalating back and forth will ultimately leave their country in ruins. Unless they manage to get a terrorist into the United States, it’s not likely they can inflict much damage on us.

That goes to Trump’s point that we need to secure the border. If an Iranian terrorist does hit us and we find out he came across our porous southern border then it’s going to be hell to pay. The left will, predictably, blame it on Trump, but what are we supposed to do? Send them more pallets of cash? I don’t think so. Those days are over.

You wanna compare Baghdad to Benghazi? Great. Reinforcements of Marines were sent into the embassy in Baghdad. Apache helicopters buzzed the protesters in a show of force. In Benghazi Hillary Clinton and Barack Obama ignored the frantic cries for help from Americans on the ground. Trump will never leave our people to die, this I can tell you.

Anybody still think the Iran nuke deal was a good idea?