Hollywood will even back a mass murderer over Trump

People don’t want another war. I get that. I don’t want another war either. I think we can achieve what we need to achieve with Iran without putting boots on the ground. What I don’t understand is the lionizing of Qasem Soleimani. When I read the list of atrocities this guy is responsible for I was stunned we hadn’t killed him before now.

Pamela Geller compiled a list of atrocities that include the 2005 assassination of Lebanese President Rafik Hariri, the Khobar Towers bombing in 1996, even the 1983 Beirut Marine barracks slaughter. Soleimanin’s Quds force created the terrorist group Hezbollah. 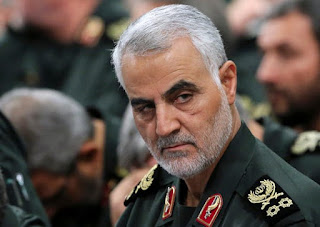 This guy was a terrorist of the worst kind (like there’s a good kind of terrorist). He was behind the bombings of the U.S. embassies in Kenya and Tanzania in 1998. The U.S. government estimates that over 600 U.S. troops lost their lives under his orders. He was an innovator in IEDs, land mines, and chemical warfare. He was responsible for raining rockets on Israel. He was responsible for the killing of more than 100 civilians in the AMIA Jewish Center bombing in Buenos Aires in 1994.


Yet after the killing of this monster, Colin Kaepernick tweeted, “There is nothing new about American terrorist attacks against Black and Brown people for the expansion of American imperialism.” Actress Rose McGowan tweeted, “Dear #Iran, The USA has disrespected your country, your flag, your people. 52% of us humbly apologize.” Nice, Rose. You’re apologizing for taking out a mass murderer.

Others like Sen. Rand Paul expressed concern that killing Soleimani may be, as he put it, “the death of diplomacy.” Perhaps. I think diplomacy has been dead a long time with Iran. If pallets of cash are diplomacy then we’re going down the wrong road. Trading cash for hostages is not diplomacy. It’s bowing to terrorists. I’m not suggesting Rand Paul is for that either. I think what concerns him—and me—is the prospect of another long war. This is different. Or, at least, it should be.

There is absolutely no reason for boots on the ground in Iran. None. If regime change is what we’re after then it will happen organically if we just leave them to their own devices. What we must do is end their spread of terrorism around the world. Killing Soleimani was a huge step in that direction. Iran need to be on notice that wherever we find them killing people outside of their own country we’re going to hit them and hit them hard. We have a distinct advantage in that regard. We’re over here and they’re over there. We’re also over there and around the world. It’s much easier for us to strike them than for them to strike us.

But if it is easy for them to strike us elsewhere in the world we need to evaluate if we really need to be there. I think that’s what will separate Trump from other presidents when it comes to fighting terrorism. Yes, we need to protect ourselves and our allies, but are we meddling in places we have no business meddling? I’m not saying that excuses attacks against Americans. I’m just saying if we find ourselves taking fire somewhere we need to do some soul-searching and determine if we should really be there in the first place.

As I’ve said in this space before, Iran cannot win a tit for tat conflict. But we need to seriously reflect on our influence around the world and make sure it’s a force for good. I think both Paul and Trump would agree.