President Trump made the right decision on DACA, the Deferred Action for Childhood Arrivals program that was illegally created by Obama’s pen. What Trump did was kick this issue back to where it belongs, the United State Congress. They are the ones tasked with passing immigration laws and this was an unlawful usurpation of an already existing law. The question now is what will Congress do? 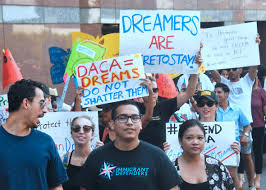 This is where it gets scary. They have six months to come up with a solution. Few people argue that children brought here through no fault of their own should be rounded up and sent back to a strange country they’ve never known. I questioned the wisdom of doing something about it on the front end. It should’ve been saved for last. DREAMers were not being rounded up and thrown out of the country. In fact, during the Obama years few illegals of any description were being deported. The problem with granting this class of people amnesty is doing so without securing the border only invited more people to come here illegally thinking they would get to stay. And they did come by the hundreds of thousands. Remember all the kids streaming across the border? It became a crisis overnight. Had the borders been secured then this nightmare wouldn’t have happened.


Congress is the place to settle this issue, but it’s imperative that anti-amnesty hawks keep a close eye on the process. The old Gang of Eight is still eager to pass comprehensive immigration reform, better known as amnesty. There’s no doubt they’ll take advantage of this opportunity President Trump has given them to pass a law much broader than simply solving the problem of children brought here by their parents.

Here are some of the things I can see the pro-amnesty crowd trying to pull. Giving full amnesty to not only children brought over here but their parents. That would be a huge mistake. Their parents knowingly broke the law as adults when they came and they should be sent packing. If they still have minor children in this country then they’re going to have to take them with them. If those minor children were born in America and, legally, are considered citizens then these parents are going to have to make a choice. They can either leave and take their children with them or they can leave the children here to be put up for adoption. If that sounds cruel, it’s not. The onus is on the parents. They’re the ones who put themselves in this predicament. I suspect most loving parents will choose to take their children with them. No matter their decision, if they broke into this country as adults they have to go.

The Gang of Eight is most certainly going to exploit this opportunity to push for a path to citizenship for illegals already in the country. The fact that they have no idea why Donald Trump was elected president is already evident. They see him as weakened by his response to Charlottesville (which has turned out to be spot on, by the way), and they will see this as their opportunity. The saner voices in Congress must step up and kill this effort before it begins. Not one member of that Gang of Eight should be allowed by senate leadership to have any say-so in crafting the DREAMer bill. If something that atrocious does break out of Congress on its way to the White House then President Trump should veto it immediately.

We all remember why Trump was elected. I hope he still does.