Son of a gun. Trump was right.

I was reading a piece from The Hill and I had a sudden flashback. The headline was “Threats of political violence rise in polarized Trump era.” Everyone seems to be at each other’s throats and it was absolutely predictable. In fact, many of us did predict it. The Hill blames Trump’s “heated rhetoric” which they claim “has angered opponents while firing up his supporters, magnifying the sense that the political divide in the country is growing wider.” 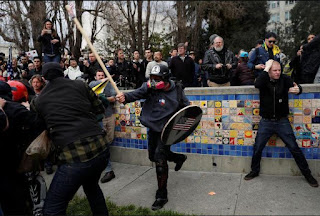 Flash back with me to an America before Trump. He was talking about doing some things that would not only upset the establishment Republicans but make the left’s head explode. He wanted to solve the illegal immigration problem, totally reform the tax system, rip out Obamacare and replace it with something market-driven. He’s only been marginally successful on one front so far—tackling the problem of illegal immigration—and the left’s head is exploding. That, in a nutshell, is what’s going on.

The Antifa thugs are out in full force claiming to fight Nazis when in reality they’re bashing in the heads of anyone who disagrees with them. That would be anyone who voted for Trump. Like they did in Berkeley recently. Trump supporters held an anti-Marxist rally and the Antifa terrorists attacked them. Even the Washington Post said the protest was peaceful until the Antifa folks came with clubs. If you pay close attention you’ll notice that the Trump folks have remained rather calm.

Antifa did the same in Charlottesville, but no media outlet showed you the violence. The media didn’t want to legitimize the Nazis and the Klan by making them look like the victims. The media are no longer about the who, what, when, where, why, and how. They can’t just report the news as it happens. They have to spin it. Journalists are no longer journalists. They’re activists.

Antifa presented themselves as heroic Nazi-bashers. The media finally saw them for what they are in Berkeley. Just plain bashers. Their bashing isn’t just reserved for Nazis. Gone is the pretense that they’re some noble protectors of the oppressed. The truth is they used the Nazis to try and legitimize their true Marxist agenda. They could not hold off being thugs even three weeks. Now everyone should be on to them. Unless people start buying this notion that Trump supporters are just Nazis too and should be physically beaten into submission.

Aside from the violence, it’s been quite entertaining to watch the left have a complete meltdown. It’s like a spoiled little brat that’s been told they can’t have anymore candy so they throw a temper tantrum. The left is throwing a collective, national temper tantrum, and somehow it’s the fault of the parent who cut off the candy.

Those who aren’t actively bashing Trump supporters in the head with clubs are calling Trump a genocidal Hitler. Black Lives Matter has come out with their list of demands, which includes all the honkies turning over their land to “black and brown people.” I can tell you right now, that ain’t happening. At least not without a fight.

Gary Cohn, Trump’s National Economic Council Director, says Antifa is just “citizens standing up for equality and freedom.” He drafted his resignation after Trump’s remarks about hatred and bigotry on many sides. Trump should’ve accepted it.

After the beat down in Berkeley is there any doubt if Trump was right? I’m sure the apologies from the RINOs are forthcoming.

The screech from the left should not be a surprising noise. It’s the sound one makes when his ox is getting gored.