When I first decided to write about the NFL/National Anthem issue it was before President Trump got involved with his opinion. Now, according to the left-wing media, it’s all his fault. He’s also been accused of making this a racial issue. It was Colin Kaepernick who made this a racial issue. Remember, he first sat for the National Anthem because he refused to stand “to show pride in a flag for a country that oppresses black people and people of color.” 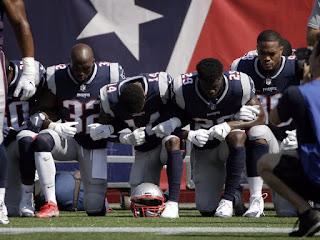 It’s instructive to examine why he was protesting, other than trying to bring attention to himself as his career waned. He believes black people are being indiscriminately gunned down in the streets because of racist cops. The fact is twice as many white folks are killed by police than blacks. Now, the Washington Post and other liberally biased institutions say you have to adjust for population. That’s intellectually dishonest. If we used the same logic for the NFL we would have to determine that it’s a racist institution since blacks only make up 13 percent of the population but 70 percent of the NFL is black.

A fair analysis of the issue is to look at the percentage of whites and blacks who commit crimes. Whites make up about 61 percent of the population. Blacks make up about 13 percent. According to the FBI, blacks commit 52.2 percent of the murders. That’s a disturbing statistic. Well over 90 percent of the victims of those murders are black, so if Black Lives Matter had its way and we made the prison population look like America those murderers would be turned loose on the black community.

In every major category, blacks are way above their population percentage. Blacks commit 28 percent of total crimes, over double their representation in the population. That is the problem. Not racist cops. Not because of “a country that oppresses black people” as Kaepernick claims. Whites commit crimes at about their population percentage. That means twice as many crimes are committed by whites. And, ironically, we find that whites are twice as likely to be shot by cops. Makes sense now, doesn’t it?

Don’t get me wrong. There are some trigger-happy cops and cops with anger management problems. Those bad seeds need to be weeded out. But obviously that affects both races equally.

My contention about the kneeling during the National Anthem is it’s bad for business. Know your customer. The NFL is dropping in the ratings all the while multi-million-dollar athletes claim it’s their right to express themselves. They do have that right, but not on the bosses dime. They’re harming the NFL brand and pretty soon the owners won’t be able to afford those multi-million-dollar salaries. When they get their pay cut I’m sure it’ll be racism.

I heard a commentator on CNN say that sports has enjoyed “social justice” protests dating back to Jackie Robinson. Robinson didn’t protest. He simply became the first black man to play Major League Baseball. You didn’t see Robinson taking a knee for the anthem, and if anyone had an excuse to it would be him. Jackie didn’t play the victim, and because of it he became the hero.

Cowboys owner Jerry Jones took a knee with the team prior to the National Anthem on Monday Night Football. I’m sure he’s trying to make the players and the fans happy. I get that. The question is has the damage already been done. The customer doesn’t care if your colors are gray or orange or purple, theirs are red, white, and blue.

Posted by Phil Valentine Show at 7:48 AM