The continued media coverup of DWS

The Debbie Wasserman Schultz/Imran Awan scandal continues to be all but ignored by the mainstream media. Since last we visited, Imran Awan, the ringleader of a trio of brothers running IT for congressional Democrats, was arrested at Dulles airport trying to skip town. He was arrested on bank fraud charges.

I believe those charges are important in understanding the entire scandal. Awan was charged with allegedly lying to loan officers of the Congressional Federal Credit Union. He got a home equity loan on a property he owned. The problem was he was renting the property at the time which is against the rules. Enough for federal agents to swoop down on someone? Probably not. 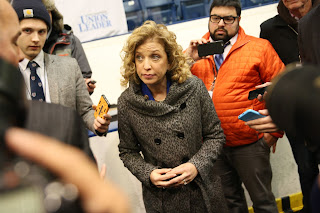 Awan and his brothers have been under investigation by the Capitol Police since February for allegedly stealing equipment from congressional offices and data from congressional computer servers. Depending on who you talked to, they performed IT services for anywhere from 24 to 31 Democrats. Once the investigation commenced, most of the Democrats dropped their services. Debbie Wasserman Schultz inexplicably reclassified Awan’s job description after he was banned from access to congressional servers and kept him on the payroll until his arrest at Dulles.


We also know that Awan wired the money he obtained in the home equity loan back to his home country of Pakistan. The exact amount he has wired to Pakistan over the years is impossible to determine at this point. Needless to say, it’s in the hundreds of thousands of dollars.

Judge Andrew Napolitano at Fox News Channel says his sources are telling him that Imran Awan not only had access to dozens of Democrats’ e-mails but every single congressman. Not only that, but Napolitano claims Awan was selling the information he obtained. We don’t yet know to whom or for what purpose.

So, here’s a guy with access to who knows what information from congressional sources. He’s being investigated for not only stealing it but selling it. We also know that he had Debbie Wasserman Schultz’s username and password for her Democratic National Committee account. Yes, the very one that’s suspected of being hacked by the Russians. There have also been independent analyses of the information stolen from the DNC and it’s been determined that the information was downloaded at a speed that makes it unlikely that it was obtained remotely. In other words, the stolen information from the DNC that was allegedly hacked was not hacked at all. It was downloaded internally.

Now who had the access? Who apparently has a pattern of behavior of stealing data? Who’s been wiring large sums of money to Pakistan? The only question that remains unanswered is where the hell is Mueller? This is obviously a stronger lead than any Russian hacking, yet not only does the special counsel ignore this story but so do the mainstream media. Since Awan’s arrest there’s been hardly any attention given by the MSM. When they do it’s under the cloud of this being some right wing conspiracy theory.

Look, we’ve been covering this story since February. It’s been my personal belief all along that this is the biggest scandal of the decade. Debbie Wasserman Schultz berated the Capitol Hill Police chief for not returning a laptop that Awan allegedly hid in an alcove in one of the House office buildings. The Capitol Police found it during their investigation of Awan. Congressman Schultz’s desperate attempt to get it back raises serious questions about her involvement.

It’s doubtful that she’s that naive. The big question is does the investigation end with Schultz, or is that just the beginning?


Posted by Phil Valentine Show at 6:06 AM