Dem IT scandal gets scant attention from MSM

What if I told you Republican congressmen had used Russian IT people who were caught stealing data from the congressional servers and the FBI had raided one of the Russian’s houses and seized smashed hard drives? CNN would never stop talking about it. Bob Mueller would hire a whole new fleet of Hillary-donor lawyers to investigate. This would be the biggest scandal since Watergate. Bigger! 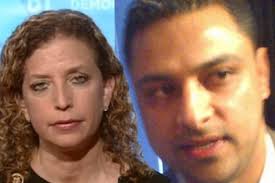 Now substitute Pakistani IT guys for the Russian ones and Democrat congressmen for the Republicans and you have the biggest story of the decade that’s being totally ignored by the mainstream media.


On top of that, these Pakistani brothers have ties to a money man who has ties to terrorism.

Hats off to the Daily Caller and Luke Rosiak for staying on this story. Were it not for them we might know very little about Imran Awan and his brothers. Imran was hired by Debbie Wasserman Schultz as her information technology guy. He managed to weasel his way into about a dozen other Democrat congressional offices and brought along his two brothers and two of their wives. They worked part time and, collectively, made $4 million over a seven year period. That is until they were suspected of illegally downloading data from congressional servers. The Capitol Police cut off their access to the servers and is now actively investigating them for theft of data and of real property in the form of computer equipment.

Now we learn from Rosiak at the Daily Caller that the FBI raided one of their homes and carried away government hard drives that had been smashed. Wonder if they borrowed Hillary’s hammer. What’s more, Imran Awan, as far as we can tell, is still on Schultz’s payroll, although his job description has been reclassified.

I don’t have the space to get into the full details of this story here, but it reads like a spy novel. All sorts of weird things going on, suspicious activity, even the rumor of blackmail with the data stolen from the congressional servers. Oh, and we learned through a leaked e-mail on Wikileaks that Imran Awan had Schultz’s username and password for her DNC account when she was chairman of the DNC. Couple that with a recent analysis of the so-called hacked e-mails that indicated they were downloaded on site instead of remotely hacked and it adds a whole new dimension to this case.

What’s downright scary is this may be the very first time you’re hearing about this. The Awan brothers have been under investigation since February! This most recent revelation of the FBI raid and the smashed hard drives was ignored by every major media outlet including Fox News. Bizarre.

The Awan brothers’ firing as IT guys has links to Secretary of State Rex Tillerson, according to some sources. They report that their firing was part of a massive house-cleaning by Tillerson prior to his taking over at State. Some of the Democrat members the brothers ran IT for were on the House intelligence committees. It’s even been reported that they were running IT for the House Permanent Select Committee on Intelligence itself, which would give them access to highly classified intel on military operations. After the death of Navy SEAL Ryan Owens in an operation in Yemen, the brothers were abruptly fired. The terrorists somehow knew we were coming. Some suspect the Awan brothers of leaking the information.

If even half of this is true, it makes Russian collusion look like a joke. We certainly know the Awans are accused of stealing congressional data. Why the blackout?

UPDATE: Imran Awan was arrested by the FBI at Dulles airport trying to flee the country. He's been charged with bank fraud. Congressman Schultz has finally fired Awan. As of this writing, the mainstream media are still ignoring this story.