This should do it for global warming, but it won't

There’s a new peer-reviewed study that’s completely being ignored by the mainstream media. It shows that “nearly all” of the global warming reported by NASA, NOAA, and the Met Office in the UK is due to fudging numbers. The report is titled “On the Validity of NOAA, NASA and Hadley CRU Global Average Surface Temperature Data and the Validity of EPA’s CO2 Endangerment Finding.” That last part is in reference to the Obama EPA using global warming to wreak havoc on industry and our economy. 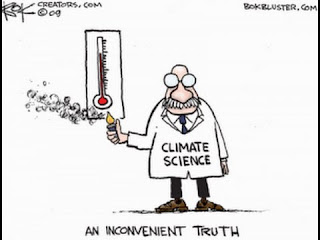 This comprehensive study looked at temperature data on record and found some astounding manipulation. It found that nearly all of the current warming they’re showing is due to adjusting the data. The authors wrote, “The conclusive findings of this research are that the three GAST data sets are not a valid representation of reality. Thus, it is impossible to conclude from the three published GAST data sets that recent years have been the warmest ever—despite current claims of record-setting warming.”


What’s worse, they went back in time to adjust temperatures to make it look like we were warming from the 1940s. “Each dataset pushed down the 1940s warming and pushed up the current warming,” says Joe D’Aleo, a co-author of the study. “You would think that when you make adjustments you’d sometimes get warming and sometimes get cooling,” he said. “That almost never happened.”

What this means is this whole business of manmade global warming is a complete fabrication. It’s a hoax. Because this study is not being covered by the mainstream media there won't be the public outcry that should come from such fraud. But fraud it is, and the fraudsters should be jailed.

You see, there’s money in global warming. If you’re conducting research and you want a grant, then you need to feed into the hysteria of manmade global warming in order to get the money. In other words, you have to fabricate your research to get the money. That’s called fraud, and it’s been going on for decades. It’s time the fraudsters were brought to justice.

It’s nearly impossible to tally up the total cost of global warming hysteria. Best estimates put it in the hundreds of billions of dollars. Imagine what those diverted resources have done to our economy, to our deficits, to our debt. The people behind the number-fudging at NASA, NOAA, and the Met need to be brought up on charges and prosecuted. This is the only way this out-of-control fraud will be stopped.

As we chronicled in our movie, An Inconsistent Truth, Al Gore and his henchmen have managed to ring hundreds of millions from the taxpayers. They, too, should be held accountable. Instead, they want to jail the “climate deniers.” It’s time to turn the tables. Hearings should be held. Testimony should be heard. We need to put this idea of manmade global warming on trial once and for all so the world can see the truth.

Despite this new peer-reviewed study, the proponents of global warming stick their fingers in their ears and close their eyes. They don’t want to hear anything that upsets their world.

The fact that they refuse to acknowledge the evidence is evidence itself that the global warming movement is not scientific. It’s not even political. It’s a religion. Religion is based on faith, and these Branch Algorians share a blind faith in the words of their prophet, Al Gore. This cult has bled into every aspect of our lives. They’ve shamed millions into changing their lifestyles. It’s time to put it down.