Much has been made about President Trump’s tweets. The Never-Trumpers shake their heads in disgust. The #Resistance goes ape, which includes the mainstream media. Even some supporters occasionally cringe. He should just stop tweeting, they all say, but that would be a huge mistake.

I’ll be the first to admit that some of Trump’s tweets are less than presidential, but we’ve never had a president quite like Trump. He has what I refer to as straight-pipe disorder. Everything he thinks goes straight to his mouth, or, in this case, his fingers. He seems to have never had an unuttered thought. And that’s what’s so great about this guy. 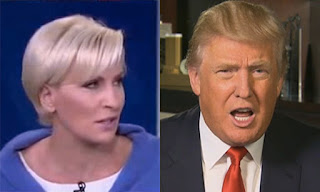 How many politicians have you met in your life who were guarded about everything they said? Not to knock the guy, but that’s Mike Pence in a nutshell. Some wish Trump would be more like his VP. I don’t agree.

Barack Obama pledged to have the most transparent presidency in history. In a sense, it was. We could see through everything he did. But honest it was not. That’s one thing you can say about Trump. What you see is what you get. It’s not like we didn’t know what we were getting. It was his bare-knuckles, New Yorker style that endeared him to millions of Americans. It is unusual for the president to attack a couple of media hacks on Twitter, but this president is nothing usual.

Mika and Morning Joe had it coming. Mika especially. Once upon a time I would tune in when Fox & Friends was in commercial break (which it seems like it’s more commercials than content these days). The vitriol toward Trump and the outright lying about the issues became too much for me. I couldn’t believe that Trump had never gone after them. Then he did and the entire mainstream media came unraveled. It was an attack on all women, the DNC said. No, it was a counter-attack against Mika who has relentlessly lied about Donald Trump for months.

Mika and Joe vehemently disputed Trump’s account of their visit to Mar-a-Lago in December, but it begs the question. What were two Never-Trumpers doing at Mar-a-Lago in the first place? Like typical Washington cocktail crawlers, they seem to want to be with the In-Crowd despite their distaste for Trump. I don’t know about you but I don’t show up at the house owned by the guy I’ve been bashing on the air. (OK, so I did show up at Al Gore’s house in our movie, but that was just to allow him equal time. He refused, by the way.)

Yes, Trump’s tweets are raw, they’re sometimes vicious, and they’re always entertaining. They’re also a window into the heart and soul of the most powerful man in the world. Many of his tweets that the mainstream media derided have shown to be true. Let’s not forget the ‘wire tapping’ tweet that the leftists labeled ‘Fake News.’ Congress and the special counsel are all now investigating the unmasking of Trump associates and countess other Americans as part of the Russia investigation.

The media even accuse Trump of racism and anti-semitism for retweeting a post from a guy who’s supposedly tweeted racist and anti-semitic things. I retweet all the time. It never dawns on me to do a background check on the tweeter.

Besides, Trump’s daughter, son-in-law, daughter-in-law, and grandchildren are Jewish. The anti-semitic label rings hollow. As does the Russia collusion. But have you noticed? They’ve moved on. To Trump’s Twitter account.