Reality aside, whether or not something is actually happening in the minds of the public depends, in large part, on the media coverage. That may sound strange but it’s true. For example, ice has been melting and reforming in the Arctic for millions of years. It wasn’t until 1979 when satellite technology advanced to a point that we could see it that it became big news. That news coverage changed the perception, but it did not change the reality. 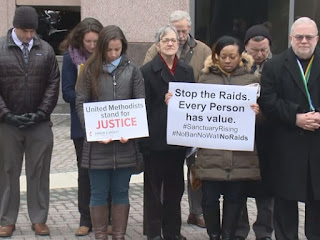 The same can be said for a different kind of ice, the recent ICE raids. The media are in hysterics over Trump’s 680 criminal illegal alien arrests last week. However, Obama averaged 1,250 arrests per week in his last year in office according to Syracuse University’s Transactional Records Access Clearinghouse (TRAC). An average of 1,250 arrests and the media hardly noticed.

And, yes, I said criminal illegal aliens. It’s already a misdemeanor to break into this country the first time. The second and subsequent times are felonies. Those people targeted by ICE are illegals with criminal records for crimes other than merely coming here illegally. The sad reality is we’re only arresting a fraction of those people who need to be kicked out of the country.

It gets worse. There are about 3 million criminal illegal aliens just walking around our country. The ones we have in custody make up only .37 percent of those who should be in custody. If there are 20 million illegals in the country then about 15 percent of them are bad actors. That’s a pretty alarming rate, and that’s just the ones we know have criminal records. Countless crimes by illegal aliens go uncounted because we have no idea who they are.

If you knew that 15 percent of any group was statistically criminal would you feel good about letting them on an airplane without going through security? Then why on earth are we letting people come unvetted to this country?

The Washington Examiner cites immigration experts as saying the reason most of these criminal illegal aliens aren’t in custody is because of sanctuary cities. So many of these criminal illegals are jailed in sanctuary cities then set free. Many of the ICE raids would be unnecessary if cities simply did their jobs and held criminals until ICE agents arrived. And we only need look to the Kate Steinle case in San Francisco to see what happens when they don’t.

It’s time we stopped making excuses for illegal immigration. Two-thirds of the people coming up from Mexico come legally. Two-thirds come the right way! There is no excuse for coming any other way.

So, what do you call 680 criminal illegals arrested in one week? A good start.