The media smell blood in the water. There are four people in Trump’s orbit who they’ve been trying to take down and they just got their first kill. General Mike Flynn, the now-former national security advisor to the president was the first. They hope he won’t be the last.

Kellyanne Conway, Steve Bannon, and Sean Spicer are all on their hit list. Unfortunately, Flynn gave them the rope to hang him. In the end, it wasn’t some ridiculous violation of some arcane law (the Logan Act), it was the fact that Flynn lied to Vice President Mike Pence which caused Pence to repeat the lie. 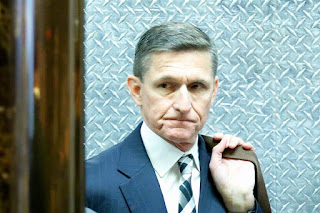 And it was all so unnecessary. Flynn was talking to a Russian ambassador about all sorts of issues, including the Obama sanctions against his country. Trump’s position had been that he would take a look at those sanctions once he became president. Telling the ambassador that was neither illegal nor improper. Misrepresenting the conversation apparently damaged Flynn’s credibility, and credibility is crucial to a national security advisor.

It’s a dangerous game to give the media their pound of flesh. Thus far in this administration, they have been relegated to mere spectators. They’re accustomed to driving the narrative. They’ve convinced themselves that Flynn, Conway, Bannon, and Spicer drive the narrative in the Trump White House. What they fail to realize is that Trump drives the narrative in the Trump White House. They seem to believe if they can destroy his inner circle they can destroy him.

With the Flynn kill it’s even more than that. To a journalist, Watergate is the gold standard. It’s the Pulitzer. It’s journalistic immortality. Before Flynn’s resignation, I predicted you’d hear the famous question crafted by the late Senator Fred Thompson and uttered by Senator Howard Baker: What did the president know, and when did he know it? Now it’s on every reporter’s lips.

Russia has been made the bogeyman. Seems like I remember not too long ago Hillary Clinton was hitting a reset button with her Russian counterpart. What happened? Well, what happened was Hillary was desperately searching for a vehicle to derail the Trump train and cloak-and-dagger intrigue reminiscent of the Cold War era seemed to be the only option. Vladimir Putin had made Obama look like a White House intern by comparison. His KGB ties and sinister looks made him the perfect personification of the leader of SPECTRE.

The left-wing media ran with the narrative. Any type of contact with Russia was suddenly an act of treason, despite the fact that since the fall of the Soviet Union they ceased to be our mortal enemy. Meanwhile, fraternizing with the true enemy of the United States—China—was not only tolerated but encouraged. China is a country that has hacked into defense contractors, social media outlets, and countless other American companies. They’ve manipulated their currency to our detriment. They’ve employed slave and near-slave labor to unfairly compete against American businesses, and they’ve killed or imprisoned millions of their own people.

But don’t look over there. Look over here at Putin and the Russians. Putin may have ordered the murder of somebody, somewhere. He rides a horse shirtless and snarled at Obama as a weak and ineffective leader. God forbid a future national security advisor was trying to build a diplomatic bridge with the likes of him.

No, let’s cozy up to the brutal butchers of Beijing instead.

Flynn’s departure was probably necessary, but it breathed new life into the left-wing media who were all but relegated to irrelevancy. Now it gets interesting.

Posted by Phil Valentine Show at 11:31 AM