It’s interesting, isn’t it? A guy makes a campaign promise. He gets elected on that promise. In the first two weeks he keeps the promise. And people lose their minds. 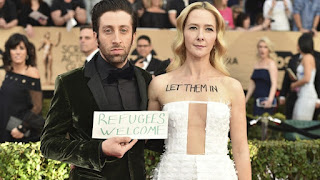 Let’s get a couple of things straight up front. President Trump’s executive order is not a Muslim ban. There are roughly 49 Muslim countries in the world. The ban only affects 7 of them. In other words, citizens from 42 Muslim countries still freely travel to the United States. Secondly, the ban is far from unprecedented. President Obama banned Iraqi refugees for six months in 2011. Critics of Trump’s ban will tell you the two are different, but they’re only different in their scope. Trump’s ban casts a wider net, something that’s been needed for a long time.

I was reading a so-called ‘Politifact’ analysis and it argued that comparing the two is flawed. They had to admit that the two policies are similar. However, they argued, “Obama’s suspension was in direct response to a failed plot by Iraqi nationals living in Bowling Green, Ky., to send money, explosives and weapons to al-Qaida.” They act as if there’s no threat to the United States now. Let’s take a look.

In June of last year, 3 Somali men in Minneapolis were found guilty of trying to join ISIS. That was just the tip of the iceberg. Too many Somalis have been arrested to name here. Remember the mall attack in Minnesota where nine people were stabbed? An off-duty copy shot the man dead. He was a “soldier of the Islamic State,” according to a news agency linked to ISIS. He was also Somali. Somalia, by the way, is on the travel ban list.

Mahmound Amin Mohamed Elhassan pleaded guilty last October for his involvement in international terrorism. He’s from Sudan, another country on the list. He was also a barista at Starbucks. Interestingly enough, Starbucks has blasted Trump’s travel ban and has vowed to make a special effort to hire refugees from these countries. Can’t imagine that I’ll ever set foot in another Starbucks.

This list of seven countries wasn’t pulled out of thin air. The Department of Homeland Security compiled a list last year following passage of the Visa Waiver Program Improvement and Terrorist Travel Prevention Act. Iran, Iraq, Sudan, and Syria were placed on the list in January of 2016. The DHS later added Libya, Somalia, and Yemen. That’s how Trump got the seven countries. These were seven countries already under great suspicion during the Obama administration for being state sponsors of terror.

Anyone who’s followed the news understands why these countries are suspect. Large swaths of Syria and Iraq are under ISIS control. In fact, ISIS controls some passport offices in Syria. The other passport offices are controlled by Bashar al-Assad. Can you imagine either one of those not wanting to send undesirables to the West?

Al Qaeda is big in Yemen. Al Qaeda in the Arabian Peninsula (AQAP) has tried to smuggle bombs aboard aircraft bound for the United States. Somalia is headquarters for Al Shabaab, another al Qaeda affiliate. They’re constantly trying to launch attacks on the West. ISIS has set up shop in Libya over the last two years, thanks to Obama’s failed Arab Spring. Sudan has been designated a state sponsor of terrorism by the U.S. for over 20 years. Iran? You need to ask?


Basically, Trump is taking all the intelligence we’ve gathered over the last decade or so and is actually doing something with it. For the first time, a president’s actually trying to keep us safe.