Connecting the dots on Ukraine

Has it struck you as odd that the Democrats moved so quickly on impeachment over an insignificant telephone call by the president of the United States to the leader of a relatively insignificant country? Buckle up. I’m about to connect the dots for you.

This may have taken the country by surprise, but it had obviously been in the works for some time. How long? It’s hard to say. 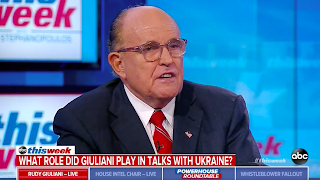 Nancy Pelosi knew what was in the transcript before the Trump administration actually released it. Pelosi let this little fact slip in an interview with 60 Minutes. She told Scott Pelley that Trump called her about his phone call with President Zelensky. “He told me it was perfect,” she said. “There was nothing in the call, but I knew what was in the call.” Then she caught herself. “I mean, uh, it was in the public domain.” No it wasn’t, Nancy. When President Trump called you the transcript had not yet been released. That means Nancy Pelosi has a spy on the inside of the Trump administration. As Congressman Liz Cheney asked on Twitter in response to the slip-up, “What did Speaker Pelosi know and when did she know it?”


Why is the call to Ukraine so important to the Democrats? As it turns out, there were news reports in 2017 that triggered a letter from Sen. Chuck Grassley (R-Iowa) to Rod Rosenstein at the Justice Department. It was in regard to a Financial Times story quoting various Ukrainian officials who admitted that they coordinated with the Clinton campaign and various Obama officials to connect Trump, Manafort, and the Russians. In other words, this was the true collusion conspiracy of 2016: the framing of Donald Trump. That’s one of the reasons President Trump made the call to the new president of Ukraine. President Zelensky ran on a no-corruption platform. Trump thought he might be able to get to the bottom of the collusion.

But apparently Trump wasn’t the only one interested in Ukraine. We now know that Attorney General Barr asked the president to call other world leaders, including Australia, in an effort to open doors to his investigation into who exactly was behind the framing of the president with the false ‘Russian collusion’ story. Someone who’s been at the forefront of that investigation is Rudy Giuliani. In his capacity as the president’s attorney, he’s been following up leads that his client was framed. One of his sources has been Viktor Shokin. This is the prosecutor who Joe Biden got fired after threatening to withhold a billion dollars in loan guarantees to Ukraine. This is also the same prosecutor who was investigating, in his words, “all members of the executive board [Burisma Holdings], including Hunter Biden.”

The Biden story is simply a sideshow of the real story. Giuliani says he’s uncovered mountains of evidence that Donald Trump was framed. In fact, his investigation has been going forward with the blessing of the Justice Department. The Democrats knew he was getting too close to the truth. That’s why they had to rush out an impeachment narrative to the media. Biden knows he’s getting too close. That’s why he’s pressuring the news media to ignore Giuliani. In what even CNN described as a “highly unusual letter,” Joe Biden’s campaign has asked all the networks to not allow Rudy Giuliani on their air.

The real scandal of the 2016 election is how the Democrats conspired with foreign agents to try and frame Donald Trump with Russian collusion. Rudy knows it. Apparently so does Bill Barr. And the Democrats are running scared.