President Trump caught a lot of grief for questioning the mortality numbers out of Puerto Rico concerning Hurricane Maria. Politifact said Trump was wrong. Why? Because the death toll that curiously jumped from 64 to 2,975 is “based in science.” Based in science? How about a body count? It shouldn’t be that hard, but the estimate didn’t come from bodies in the ground. It came from an estimate conducted by George Washington University. 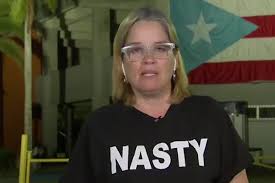 There’s an old joke that 67 percent of statistics are made up on the spot. There’s no doubt that the inflated numbers in Puerto Rico were designed to make this particular disaster “Trump’s Katrina.” What the left-wing media chose to ignore as they reported on the numbers they say are not in dispute is the malfeasance on the ground in Puerto Rico. Large pallets of supplies sent to help the hurricane victims sat rotting and never got to their intended destination. When Mayor Cruz appeared on TV with a ‘NASTY’ t-shirt the situation on the ground in Puerto Rico had undoubtedly turned political. This was her chance to do something for the ‘resistance.’ What she did was use her own people as pathetic pawns to score points against Trump.

At least CBS News reported that “donated food sent to Puerto Rico in the aftermath of Hurricane Maria were left to rot in a parking lot of a government facility.” They said, “about 10 containers filled with non-perishable supplies sat at the government facility for 11 months.” If the death toll in Puerto Rico is actually dramatically higher, it’s no doubt due to the ineptitude of the people on the ground tasked with distributing much-needed supplies.

The New York Times, which themselves put the death toll at 1,000, savaged the president for questioning the GWU numbers. They came up with 1,000, but if somebody else says it’s essentially three times that then, yeah, let’s go with that. Again, they take the numbers at face value without questioning them.

It’s only when you start to peel back the layers of the study that you find the flaws. The GWU study counted indirect deaths like people having trouble refilling prescriptions. Any increase in diabetes deaths over the prior year were blamed on the hurricane. One would assume under this methodology that if a plane went down carrying Puerto Rican refugees to Florida that number would be counted too. They even counted increases in suicide and Alzheimer’s disease!

The left is famous for taking unrealistic numbers at face value if they advance their cause. Who can forget the 97 percent consensus among climate scientists that humans are causing the earth to warm. That claim has been totally discredited numerous times but continues to be stated as fact by the left.

Congressman Steve King’s office did a study several years back trying to determine how many Americans are killed by illegal aliens. Through news reports and government statistics they arrived at 25 Americans per day, on average, killed by illegal aliens. The left-wing media went after King’s numbers with a vengeance. And I’m not saying they shouldn’t question them. They should, but they should also question numbers coming from the left. But they don’t.


As the saying goes, figures don’t lie, but liars figure. Both the right and left will continue to use statistics to further their cause. It’s up to us as consumers of this data to question everything, especially if the figures don’t pass the smell test. You can fool all the people some of the time, and some of the people all the time.


Posted by Phil Valentine Show at 7:35 AM