Aretha Franklin’s funeral may have set a record for the longest celebrity eulogy. There were heartfelt tributes to the Queen of Soul. There was a long list of celebrities who came to pay their respects. Then there were the controversial moments, like when one reverend seemed to move his hand too close to Ariana Grande’s breast. Jesse Jackson, of course, chose to turn the event political when he chastised the crowd for lining up to see Aretha yet not showing up at the polls in Michigan in the 2016 presidential election. He also recognized Maxine Waters for the “work” she’s done, which was taken to mean her tireless rants against President Trump. 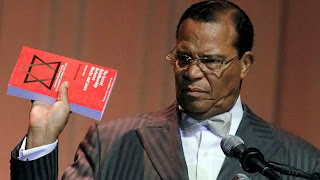 Al Sharpton lectured Trump on showing some R-E-S-P-E-C-T when several days before on his television show he didn’t even know how to spell it.

The event was marred with the presence of known racist and anti-Semite Louis Farrakhan sitting on the stage with Bill Clinton, Jesse Jackson, and Al Sharpton. One can only imagine if David Duke had spoken at the funeral of a white singer.

But none of that drew even a peep from the family. It was the words of Rev. Jasper Williams, Jr. that drew gasps of horror. The reverend described children in a home without their father as “abortion after birth.” He told the crowd,”Black lives must not matter until black people start respecting black lives and stop killing ourselves.” A Franklin family member called the remarks “very, very distasteful.”

So, Jesse Jackson and Al Sharpton bashing Trump from the pulpit and giving face time to one of the most famous racists of our time wasn’t distasteful, but a pastor urging black folks to stop killing each other was? It’s a sad commentary on where we are as a country.

First of all, Aretha’s funeral should’ve been about Aretha. The race-baiters and their divisive rhetoric should’ve been stopped at the door. The fact that the family allowed them to speak sullied the event. But if you’re purposely making it a political event by inviting lightning rod figures to speak then you shouldn’t be shocked by anything that’s said. And you certainly shouldn’t be shocked by someone naming the problem for what it is.

We have an epidemic of black-on-black crime in this country. Half of all murders are committed by primarily black males. Over 90 percent of their victims are also black. It’s easy for white folks to ignore the problem. Chances are it will never affect them, but part of our American family is hurting. It’s going to take the majority to change it. It’s not at all helpful when blacks themselves not only ignore the problem but are outraged by anyone who doesn’t.

Colin Kaepernick divides a country with his refusal to stand for our national anthem and is rewarded with a Nike ad. Why don’t we do this? Why don’t we start a dialogue on how to solve the problem? If you think the judicial system is racist and turning loose black convicts from prison until prisons looks like America is the solution then you obviously don’t understand the problem. And kneeling is not the solution. It’s actually part of the problem too. It’s whistling past the graveyard.

Rev. Williams had the courage to speak the truth to a room full of people who weren’t ready to hear it, in front of men like Sharpton, Jackson, and Farrakhan whose rhetoric has largely contributed to the problem. And it’s Rev. Williams who’s the embarrassment? We have a long way to go.

Posted by Phil Valentine Show at 7:35 AM