There is no doubt Starbucks made a mistake in Philadelphia when it had two black guys arrested for not buying anything as they waited for a friend. They settled with the two men for an undisclosed amount. But now, in typical liberal fashion, they have overcorrected. Facing an enormous PR problem, the coffee chain has adopted a policy that says anyone can use their bathrooms and people can hang out indefinitely without buying anything. 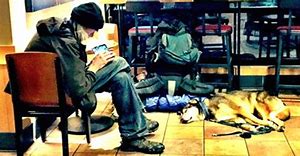 Folks in L.A. can see exactly where this is heading. Their homeless problem has exploded. They still can’t figure out why. I read an article recently that blamed the rich people in Bel Air. This is a favorite liberal pastime, blaming the rich for the plight of the poor. The fact that some movie producer is making millions has absolutely nothing to do with the guy wandering around the streets of L.A. Or does it?


Guilt is the driving force behind the homeless boom in Los Angeles. Do-gooders feel guilty about the homeless and now they’re building them tiny houses and trying to find vacant land to park them. Bums are coming in from all over the country. I’d love to see a survey of how many of the so-called homeless in L.A. are actually from L.A.

It’s important draw a distinction between those who are truly homeless and those who are what used to be referred to as vagrants. Studies show the truly homeless—those who have temporarily lost their jobs and a place to live—are homeless on an average of three months. What you see wandering the streets are not blue collar workers who found themselves living too close to the edge and lost their homes. The street people can basically be broken down into three categories. There are those who have some sort of substance addiction. There are those who are mentally ill. Then there are the bums. These street people aren’t homeless because they don’t have a home. They’re homeless because they can’t keep a job. Housing them in tiny homes just to get them off the streets isn’t going to solve the problem. You have to address why they’re unemployable.

Starbucks has always prided itself in being progressive. Remember, this the company that has been paying black folks the same as white folks since 2018. They dropped their policy of demanding to know how much you were making at your last job then issued a press release bragging about their new policy. Welcome to the 21st Century, Starbucks. I’ve had numerous jobs, and I don’t recall once being asked how much I was making at the last one. It’s none of their business. Apparently some companies still require you show them your W2 from the last job. If you ever encounter such a company I suggest you walk away. They’re going to try and screw you. The only thing that matters is how much the current job pays and if you’re willing to work for those wages.

If Starbucks really cared about the homeless they’d help rehabilitate these people and give them jobs. Instead, they brag about how many immigrants they’ve employed, illegal and otherwise.

The irony is, because of its new policy, Starbucks will become the new homeless encampment in L.A. and across the country. If you can use the bathroom and sit at the tables without buying anything how long before that word gets out amongst the homeless community?

It’s classic liberalism. They see a problem then only make it worse. And they will destroy their own business in the process.