What really scares the Democrats about Trump 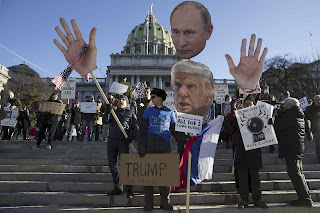 That’s because the story of the Electoral College was that electors abandoned Hillary Clinton at over twice the rate they abandoned Trump. MSNBC did mention Trump in several stories on their website, the lead being ‘Trump’s win is anything but historic.’ True, it may not be historic in terms of electoral votes, but this election has certainly been historic in terms of whining.

Remember when George W. Bush won a hotly contested race in 2000 with hanging chads and Supreme Court decisions? He needed 270 electoral votes to win and ended up with 271. That would’ve been the perfect year for ‘faithless electors.’ I don’t recall any effort on the part of the Democrats to steal that election for Al Gore.

I guess that begs the question why now in 2016?
It has everything to do with Donald Trump. You would think someone who used to be a Democrat and who once gave money to Hillary Clinton would be the least of their worries. Truth is Trump is their worst nightmare.

The Democrat strategy for years has been a numbers game. Their plan has been to flood the country with immigrants, largely illegal ones, in the hopes of one day giving them amnesty. I refer to these people as undocumented Democrats. They’ve been hugely successful in California. George H.W. Bush won California by about 300,000 votes in 1988. He was last Republican to do so. Trump lost California by more than 4 million votes.

Immigration to California — both legal and illegal — exploded after 1988. According to 2010 Census figures, 25.4% of Californians are now foreign born. That number is certainly higher by now. Compare that with a state like Texas, which everyone assumes has a large foreign-born population, and it’s 10.8%.

Unfortunately, Democrats see immigrants as fertile ground. Used to be you had to live in this country 5 years before you could get any kind of welfare assistance. Not anymore. According to the Census Bureau’s Survey of Income and Program Participation (SIPP), 51 percent of households headed by an immigrant are now on some form of welfare. This is not by happenstance.

The immigrants of old came to America for the opportunity. Too many of today’s immigrants come for the benefits. The Democrats are only too eager to provide those benefits. Food stamp recipients, for example, are up 42% under Obama. You create a dependent class and you create Democrat votes forever.

The centerpiece of the Trump administration will be stopping the flood of illegal immigrants. These illegals are the farm team for the Democrats. Trump and the Republicans have a better idea. Create jobs and, thus, create independence instead of dependence. The Trump strategy is to help everyone who is able to become self-sustaining. He believes Americans are more productive and happier when they have good jobs. This is something the liberals still don’t quite understand.

The Democrats are still banking on dependence. Trump is banking on hope.