Trump, Taiwan, and the hysterical media

Who would’ve thought one little phone call would cause such a stir? Donald Trump takes a congratulatory call from the president of Taiwan and the left-wing news media go nuts. They start screaming “One China Policy” and suggest Trump may have upended the whole world order. 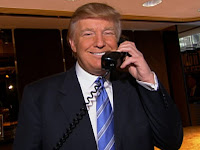 It’s something that needs upending. A little background. When the communist took over China in the civil war of 1949, the legitimate government of China set up shop in Taiwan. They still refer to themselves as the Republic of China. America’s One China Policy dates back to Richard Nixon. When Nixon was trying to open trade with China, he issued a diplomatic communique stating there was only one nation called China. That did not acknowledge China’s dominion over Taiwan. It merely opened to door to trade relations with China by officially recognizing them.


Jimmy Carter broke off relations with Taiwan in 1979 which prompted Congress to pass the Taiwan Relations Act. That act sets up diplomatic relations with Taiwan and promises to protect them from invasion by China. That is America’s official relationship with Taiwan. Any other relationship that favors China over Taiwan is simply a presidential policy. As we know from the Obama administration, those are easily cast aside by a new president. Regarding China, Trump should do just that.

One would think that the American left would be more sensitive to human rights abuses than anyone else. After all, they’re the ones constantly reminding us of the very slightest hurt feelings of college snowflakes still devastated by Hillary Clinton’s loss. They’re the ones who vigilantly guard our language so that we don’t say something inappropriate that might upset the protected classes. Yet they want to protect and excuse the most brutal regime ever known to mankind.

According to The Black Book of Communism, the Chinese Communist regime has killed 63 million people. That compares to about 11 million who were killed during the Nazi Holocaust. Why we even trade with a regime with such an abysmal record is beyond me. We broke off trade relations with Cuba over about 3,000 people executed in firing squads.

But the left-wing media are scared to death to upset China. Remember when the same news media were scared of Ronald Reagan because he had vowed to relegate the Soviet Union “to the ash bin of history” when he was running for president? And he did. Imagine how nuts these people would’ve gone had Trump vowed the same thing for China.

I’ll say it out loud. Communist China needs to be relegated to that same ash bin of history. The magnitude of Trump’s phone call with Taiwan was not measured in terms of diplomacy. It was measured in terms of fear. There needs to be an abrupt change in trade policy with China. First of all, no item made with slave labor should ever be allowed to enter this country. Basic human rights should be observed. You lock up dissidents, you raid churches, we don’t trade with you. That’s how you affect change. That’s how you free the oppressed. That’s how you break the grip of brutal communism on an entire nation of people. That might very well be Donald Trump’s greatest legacy, while the mainstream news media cower.

The left seems to have a fascination with communist regimes like China and Cuba and the Soviet Union. Of course, they’ve never had live under one of them. In their effort to right the wrongs of the aggrieved, maybe the American left ought to start with the Chinese people. They’re certainly deserving of a cry-in.

Posted by Phil Valentine Show at 8:27 AM