The left is having a fit over Rex Tillerson, the CEO of ExxonMobil, as Trump’s pick for secretary of state. I’ve dubbed him T. Rex. After Mad Dog Mattis, all of Trump’s picks need to have nicknames. Let’s face it, the reason the left is going nuts over T. Rex is because he heads up Big Oil. They hate Big Oil. They think Big Oil is destroying the planet. They think people like Tillerson should be treated like war criminals. 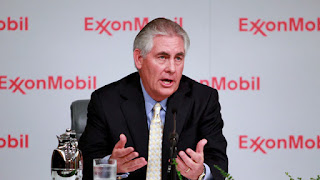 But the inexplicable focus is his friendship with Vladimir Putin. Look, I know Putin is former KGB. I know he came out of his borders. I understand being upset about Crimea. What I don’t understand is when did Russia become our enemy? Oh, yeah, I remember the Soviet Union. I also remember that it crumbled. After that, Russia became our friend, our ally.

Heck, I remember Hillary meeting with the Russians and pressing that cheesy reset button. What happened to that? Just four years ago, Obama whispered to a Russian politician that he’d have a lot more leeway after the election. Remember that? I don’t recall the Democrats having a cow over that. I remember some Republicans being upset, but they were upset because Obama was telling us one thing when his obvious plan was another.

Could it be the Russians took advantage of him? Obama does look a lot like a wimp next to Putin, even though Obama’s got him by a foot. I think that’s what really gripes the liberals. Putin and Russia have run rings around us. Now there’s a new sheriff in town. Trump doesn’t take garbage from anybody. Just ask the Chinese.

Speaking of whom, why was no one calling for a congressional investigation when they were hacking into our defense contractors and private companies like Yahoo? And why are the people on the left so freaked out about Russia, which is a republic, and not China, which is a communist dictatorship?

Sure, the Russians may have hacked into the DNC, although I have my doubts. I have no problem with launching an investigation to find out. However, how did any of the hacks have any effect on the election? They didn’t. One moment the Democrats are blaming the Russians, the next they’re blaming James Comey and the FBI. How about blaming Hillary Clinton? Nobody trusted her. Few people liked her.

What was the centerpiece of Hillary’s campaign? I’ll tell you. It was that Trump was unfit for office. It was some mythical war on women. It was how people weren’t ready for a strong woman or a female president. It was about how everyone was out to get her. It was about all sorts of things that either didn’t exist or nobody cared about.

What was the centerpiece of Trump’s campaign? Build the wall. Secure the border. Lower taxes. Get a better trade deal with China. Get people working again. These were all subjects that resonated with the American people. Now that they’ve lost, all the Democrats can do is cry that the election wasn’t fair.

Now they want to do away with the Electoral College. Look, that’s how the game’s played. Had it been about the popular vote then Trump’s strategy would’ve been different. One of my listeners put it this way. Two teams are playing football. One has 350 total yards. The other has 300, yet the one with 300 yards made 3 touchdowns. The team with 350 yards made one. It’s not about the total yardage. It’s about the score.


So with that I’ll leave you liberals with one thought. Scoreboard!

Posted by Phil Valentine Show at 6:33 AM