What part of illegal don't you understand?

If there’s one issue that’s been thrust to the forefront because of the 2016 presidential election it’s the issue of illegal immigration. Donald Trump tapped into a long-frustrated electorate that believed their voice wasn’t being heard on the issue. Conventional wisdom had kept Republicans pretty much away from the issue for fear of hacking off Hispanic voters. But they failed to understand the frustration within the Hispanic community itself. 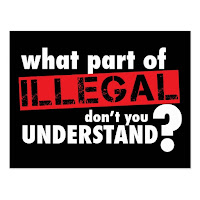 Pulse Opinion Research conducted a poll just before the election and the results were shocking to the beltway crowd that thought Hispanics were a monolithic voting bloc. When asked if the government’s efforts to enforce immigration law have been too much, too little, or just right, 51% of Hispanics said the government’s efforts had been too little.

When asked if employers should be required to verify legal status of their workers, nearly half of Hispanics said yes.

Asked if they would support a policy that forces illegals to return to their home countries and one that penalizes employers who hire them, half said yes.

What the open borders crowd fails to realize is the people most adversely affected by illegal aliens are legal aliens. Many of them are competing for the same jobs, for the same opportunities. Illegals have a distinct advantage because they don’t play by the rules. Both parties have pandered to the illegals for too long.

President Obama was asked before the election if so-called “dreamers”—kids brought here illegally by their parents—would get in trouble if they voted. The interviewer referred to these people as “undocumented citizens,” a ridiculous oxymoron. Citizens, by their very nature, are documented. The president told the interviewer that no one would try to intimidate them into not voting. He went on to say that if you manage to vote then you’re a citizen! It’s supposed to be the other way around.

The rule of law has been thrown out the window over the past eight years, but ignoring immigration law certainly didn’t start with Obama. George W. Bush was as bad, if not worse. Like Obama, he was pandering for votes, not recognizing the undercurrent of anger in the Hispanic community.

The wave of illegal aliens over the past several years has been mind-boggling. The plan is to flood the country with illegal aliens, put them on welfare, grant them amnesty, then add them to the voter rolls. We should start referring to these people as what they are: undocumented Democrats.

It’s a numbers game. California went Republican as late as 1988. The flood of immigrants, legal and illegal, has ensured that California will never be red again. Democrats want to spread that model to the rest of the country.

And you’re a racist if you don’t go along. This is the single biggest issue of our time. Republicans have been scared to make it the centerpiece of their campaign. Donald Trump was not, and we owe him a debt of gratitude for having the courage to do that. It’s up to the individual states to make sure they don’t become California. Many states have laws on the books against hiring illegal aliens. We need governors to grow backbones and enforce those laws.

Republicans need to stop being afraid of confronting this issue. Whether it’s overcrowded prisons or overcrowded schools, high crime rates or the scarcity of good-paying jobs, illegal immigration is a component of every major problem we face. It’s time we recognize that at least half of Hispanics in America are on the right side of this issue. Let’s fix it before it’s too late.