The false enthusiasm for the first female president

In the aftermath of the presidential election, I watched female anchors on CNN report with sadness how they took their daughters to the polls with them. They were hoping to be a part of the historical election of the first female president. That sounds great but it’s a horrible excuse to vote for somebody. We found that out with Barack Obama. 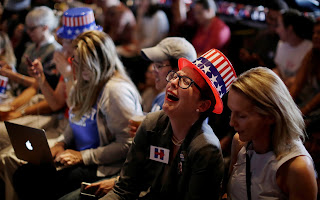 The irony is Kellyanne Conway was the first successful female campaign manager of a presidential campaign. Funny how such firsts are unimportant to the mainstream media when they’re Republicans.

Too many in the media were so fixated on Hillary becoming the first female president that they ignored the reality. Very few Americans really cared about the issue. Newsweek, the once great weekly news magazine that has devolved into an obscure online Democrat sycophant, declared “the presidential election was a referendum on gender and women lost.” In just one more example of how out of touch these people are they also demonstrated how wrong they were and continue to be. Women were not the issue. Hillary was. Their myopia was so acute that they only saw a female candidate. The rest of us saw a candidate under constant federal investigation who demonstrated questionable judgement on numerous occasions and was perceived by much of the country as too crooked to be president. But, of course, we just hate women.

Now these same forces are trying to saddle Donald Trump with labels such as racist and anti-semitic. Do you realize how insane this is? When Donald Trump opened up his Mar-a-Lago golf club he upset the Palm Beach norms by accepting blacks and Jews. Now the mainstream media are trying to paint his senior advisor, Steve Bannon, as anti-semitic. You do know that Trump’s own daughter, Ivanka, is Jewish, right? So are his son-in-law and one of his daughters-in-law. The notion that Trump would have allowed some so-called “alt-right” neo-Nazi into his inner circle is absurd. Bannon, by the way, worked for Goldman Sachs, Breitbart, and owns a piece of the hit TV show, Seinfeld. All Jews.

The mainstream media are obsessed with things that obviously are second nature to Trump. Blacks like Dr. Ben Carson and Herman Cain have enthusiastically embraced his campaign and now his presidency. He’s always surrounded himself with bright women like Conway and his daughter, Ivanka. First and foremost, he surrounds himself with the best. That’s something we’re not accustomed to seeing with Obama and the Democrats. They’re more concerned with diversity. Trump’s more concerned with winning. Barriers are broken when excellence is allowed to thrive. Otherwise, it means nothing.

And yes, breaking through barriers is something to celebrate. When Tony Dungy and Lovie Smith became the first black coaches in a Super Bowl in 2007 it had nothing to do with affirmative action. It had everything to do with excellence. Nobody spotted the Bears or the Colts points so they would win their divisions. They earned the right to be there.

That was Hillary’s problem. The Democrats nominated her, in large part, because it was her turn and because she was a woman, not because she was the best they had to offer. The rest of the country was less enamored with the prospect of making her the first female president. First for first sake is folly. We’re due a female president. That will happen, and when it does it will hopefully be someone in the tradition of Margaret Thatcher or Jeane Kirkpatrick. Thank God a flawed candidate like Hillary Clinton didn’t screw that up.