When a kiss is not just a kiss

Let’s get some things straight, if you’ll pardon the pun, on this Michael Sam gay kiss thing. If you’re not up to speed on this one, Michael Sam is the first openly gay player to be drafted into the NFL. He went in the seventh round and was seventh from the end to be drafted. After the St. Louis Rams picked him, his boyfriend gave him a smooch on the mouth.

Miami Dolphins safety Don Jones tweeted “OMG” and “horrible” after the kiss. He was fined an undisclosed sum and suspended from team activities until he can undergo re-education by team officials.

Super Bowl champ Derrick Ward tweeted, “I’m sorry but that Michael Sam is no bueno for 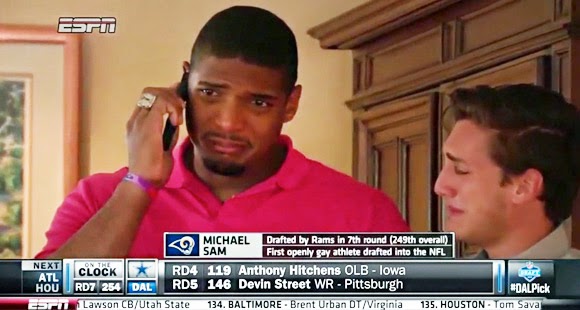 doing that on national TV. Man U got little kids lookin’ at the draft. I can’t believe ESPN even allowed that to happen.” Ward got death threats against him and his children.

I have absolutely no problem with Michael Sam playing in the NFL. That’s not even the issue. The issue is the outcry — along with punishment and/or threats — against those who dare say they find two guys kissing repulsive. For those who say that homosexuality is natural for gays I would remind them that a negative reaction to a gay kiss is just as natural for heterosexual men. But the PC crowd is now bound and determined to beat that out of us.

I made the comment on my radio show that if you’re a man and you didn’t have a distasteful reaction to the kiss then you’re either gay or bisexual. Some guys came unglued on me to which I asked, “You have a problem with someone who’s gay?”

It’s an interesting turn of the tables when those who profess to be so open-minded about such things are suddenly offended when their own sexuality is questioned. If, in your mind, there’s nothing wrong with being gay then there’s nothing to be upset about.

The problem is the double standard. When Tim Tebow was drafted in 2010 a Boston sports talker said Tebow’s draft party looked like a Nazi rally, clearly a reference to his religiously conservative principles. The host apologized on the air and that was the end of it. No suspension. No fine. No re-education camp.

Former New England Patriot Teddy Bruschi opened up a post-draft recap on ESPN by saying the biggest story of the draft was the Michael Sam story. Former Eagles QB Ron Jaworski disagreed, saying the anticipation of Johnny “Football” Manziel’s draft was, by far, the biggest story, and he was right.

Had Michael Sam not been gay no one would’ve noticed. There were those who said he was passed over because of his homosexuality. Then why did three-time national champion quarterback AJ McCarron from Alabama go in the fifth round of the draft at overall pick number 164?

Posted by Phil Valentine at 1:05 PM