Well, let’s see, in the last 40 years we’ve moved from global cooling to global warming to climate change and now climate disruption. That’s the latest ration of rubbish being issued by the White House. Their economic policies are a joke. Obamacare is an unqualified disaster. They’re trying to latch on to something that will connect with voters here before the mid-term elections so they’ve issued yet another Chicken Little report to try and scare people into their arms.

Apparently it’s not working. Most national polls show global warming, uh, climate disruption is a concern for only about 30 percent of Americans. Why so low? Because none of what 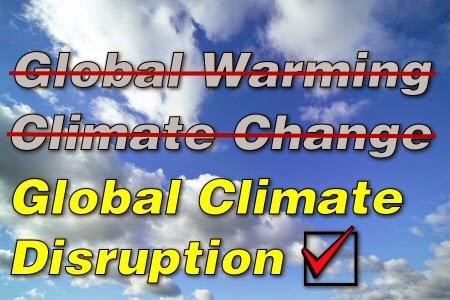 these people have predicted has come true.

I hate to be the one to say I told you so but I told you 2014 was going to be the year they went for broke on this issue. Since they’ve been so wrong for so long they have to up the hysteria to drown out their failure. They figure if they can just work you into a frenzy you won’t actually sit down and look at what’s happening around you.

Well, we did in our movie, An Inconsistent Truth. We learned that the polar bears aren’t dying off, the hurricanes aren’t getting worse, the sea levels aren’t rising, carbon dioxide is not a pollutant. When the earth moved from cooling to warming they changed their tactic from global cooling to global warming. When the earth stopped warming they called it climate change. Now they’re trying to convince you that every time you hear about a tornado or a flood or a drought it’s something entirely new.

There’s really nothing new going on. As we point out in the movie, wild weather isn’t getting any wilder. It’s just that these folks are focusing on it more. Have you ever bought a new car? Right after you start driving that car you start noticing cars just like it all over the place. Before you didn’t notice at all. Do you think there were suddenly more of those cars on the road? Of course, not. You just notice them more.

Which brings me to a very interesting point. I heard a report that Miami is experiencing sea level rise. Miami is on the Atlantic Ocean. Now, common sense would tell you that if Miami is really seeing sea level rise then every town on the eastern seaboard would be seeing sea level rise. They’re not. What’s more likely happening is either the coastline is eroding around Miami or the actual land is sinking a bit. This has been shown to be the case in several parts of the world.

By the way, some places on the Atlantic Ocean have seen sea levels recede. If global warming is really global then it would be happening globally. It’s not. But that doesn’t stop people like John Podesta and his boss, Barack Obama, from trying to scare you. And scare you into what? Into joining them in destroying the oil and coal industries that have advanced a civilization farther than most anything else in history.

Maybe if the president is so set on weaning us from fossil fuels he’ll try a stay-cation this summer instead of Hawaii.