The real Christian approach to taxes

I was reading a piece in the Wall Street Journal about religious groups in Illinois protesting the state’s income tax. No, it’s not what you think. Yes, they think the state income tax is unjust, but only because it doesn’t tax rich folks enough. Right now, the Illinois state income tax is a flat tax. These protestors want a progressive tax. In other words, the more you make, the bigger chunk they take, like the federal income tax.

“This is a moral imperative,” the Journal quoted Rev. C.J. Hawking as saying. “There are over 400 passages in the Bible that talk about God’s special concern for the poor.” Yeah, Reverend, and you are supposed to be the one taking care of them, not the government. 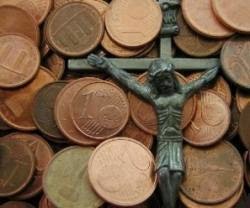 But this is the state of our nation these days. Too many religious institutions are shirking their responsibilities and insisting — and, in this case, protesting — that the government should do their job for them. It’s quite interesting that many of these same liberals are the ones who claim a separation of church and state, yet they believe the state is somehow obligated to answer the call of the Bible.

While Rev. Hawking and other so-called religious leaders protest the rich not being gouged, churches in Illinois are not only exempt from paying property taxes, they buy items without paying a sales tax. Nothing against churches, I’m a member of one, but they’re the last entities that need to pointing fingers at tax scofflaws.

If Hawking and others are going to get biblical on us, the Bible says we should tithe. Maybe Hawking needs to look that word up. It means to give a tenth. There’s nothing in the Bible about a graduated income tax. In fact, there’s nothing in the Bible that says the state should be paying for the poor. Not that I’m against that, mind you, but there are too many people passing themselves off as poor when they’re not.

One of the primary responsibilities of a Christian church is to look after the less fortunate. That’s why you see so many charities that have been started around this country by churches. Prior generations understood that churches were called by God to help those less fortunate. This new generation of liberal theologists believe the government should do the work. They protest for higher taxes on the rich, when the rich are already paying the bulk of the taxes. They protest for a “living wage” instead of stepping in themselves to help folks who aren’t making it month to month.

To be quite honest, it makes me absolutely furious to hear so-called religious people scold anyone about not doing their fair share, especially the rich. To quote a CNBC headline, “The rich do not pay the most taxes, they pay ALL the taxes.” This was a story about a Congressional Budget Office report that revealed the top 40 percent of wage-earners in America pay 106 percent of the taxes. The bottom 40 percent pay negative 9 percent.

How can this be? The bottom half of wage-earners pay no income tax and the the bottom 40 percent get money through the Earned Income Tax Credit that they never paid in. In other words, they not only pay no income tax, they make money on Tax Day.
Now, back to these “religious groups.” How Biblical is it to steal from those who produce and give it to those who don’t? Theft shrouded by a reverend’s robe is no less theft. In fact, stealing in the name of the Lord is the worst.