Come on, folks. Get a grip.

I want it known up front that I am a pet lover.  I have owned pets all my life.  I wept out loud when my 18-year-old cat, Smokey, died.  We have a Jack Russell that I affectionately refer to as my Jack Russell terrorist.  With my pet street creds out of the way I want to address the subject at hand.

My story begins at a beachside restaurant in Pensacola Beach, FL just a couple of weeks ago.  I was enjoying my breakfast from the sumptuous breakfast bar when a couple came in and was seated not far from me.  In addition to the earth boots and other attire that gave them the look of two professors who just walked off the campus of Berkeley, the woman had a dog with her.  A rather large one, too.  I’ll admit the canine was well-behaved but when she went to the breakfast bar she took Fido with her.

Now, I had already enjoyed my breakfast - thank goodness - and was just enjoying a second cup of coffee and checking my e-mail.  As I was leaving I had planned to discreetly ask the hostess if dogs were now allowed in restaurants in Florida when the woman walked in front of me with the dog.  He was wearing a neckerchief that read “Service Animal.”  I decided to hold my tongue but I couldn’t help wonder what kind of pansy excuse she had for dragging her dog along everywhere she went under the guise of a service dog.  She certainly wasn’t blind.

After bringing the subject up on my radio show I was educated to the fact that some dogs are used to predict seizures.  Others are trained to sniff out foods that may trigger food allergies. 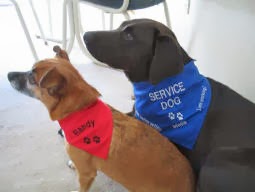 I get all that but I also know there are lots of people who abuse the “service animal” laws.

As it happened, right after my encounter there was a rash of news articles on the subject.  One, from CBS News, focused on just how easy it is to obtain a service animal vest for your pet.  Apparently anyone can go online and buy one and there doesn’t appear to be a law to stop them from using them.  And, of course, businesses are scared to death they’ll be sued if they dare say anything.  It’s getting completely out of control.

The bad part is these people who try to pass their pets off as service dogs are doing a disservice to those people who actually need a service dog to lead a free and independent life.  Some businesses are starting to get wise and the CBS piece featured a man with a legit service dog who had been ejected from restaurants simply because non-service dogs were acting up and his was assumed to be fake, too.

But I’m curious about the psychology here.  What kind of person - assuming they’re not in physical need of a service dog - has to take their pet with them everywhere they go?  I’ve heard the excuse of separation anxiety.  They claim the pet has it but it’s really the pet owner.

Again, I love Jack like he’s part of the family but I understand his place in the family.  He’s not a human.  He’s not as important as one of my kids.  He’s a dog.  People who don’t realize the difference have serious mental issues and the last thing they should be doing is subjecting the rest of us to their neuroses.

If you just can’t go out to eat without your dog, maybe it’s best you stay home.