Zealotry is tearing this country apart. Extremists on both the right and the left make it nearly impossible for reasonable people to be heard. I’ve taken a lot of heat from my radio listeners for demanding proof that the election was stolen. It’s easy just to chant “Stop the Steal,” but it’s another thing altogether to prove it. There are too many who don’t want to wait for proof. They’ve already jumped to the conclusion that the election was stolen. 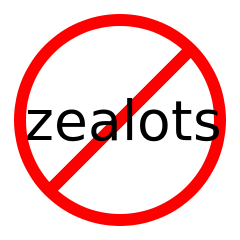 There are also extremists on the other side, some even reside at Fox News, who believe it’s necessary to qualify any allegation of voter fraud with the disclaimer “unfounded.” Eric Shawn at Fox News is the worst. When Christine Blasey Ford accused Brett Kavanaugh of sexually assaulting her, did Shawn and others qualify her accusation as “unfounded?”

We don’t yet know what transpired in the recent 2020 election. Social media censoring tweets and posts and news reporters discounting anyone who questions the results does not illuminate the issue. Nor does assuming the election was stolen without any hard proof.

Zealots illuminate the edges of insanity. In a way they do the rest of us a service by clearly showing where the side of the cliff is. That doesn’t mean the truth lives in the mushy middle. It means that reasonable people can stand just to the right or left of center and disagree, but disagree reasonably.

Most of the zealotry we’ve witnessed lately in this country comes from the left. Black Lives Matter, Antifa, and other radical groups seek to sow disunity while simultaneously calling for unity. Unity to them means you drop any opposition to them and acquiesce.

Now the shoe is on the other foot. The aggrieved are now the 73 million people who voted for Donald Trump, and they’re expected to go quietly into the night. The Trump voters have reason to be angry. Make no mistake, there was voter fraud in the 2020 election. We have multiple instances of dead people voting. We have some counties where over 100 percent of the registered Democrats voted. There was fraud. The question is if there was enough voter fraud to overturn the results of the election. That remains to be seen.

Of Trump’s legal team, Sidney Powell has made the most compelling case. She has a sworn affidavit from someone who worked for the software company that supplies the software to the Dominion voting machines used in many states. This whistleblower says the developers built in a back door to allow tampering. If true, that’s a very serious accusation, but it’s going to take more than just that to prove voter fraud. If a back door was built in, you have to prove that someone used it. And you have to prove that they used it widely enough to change the results of the election. That’s a tall order. It doesn't help her case that the Trump legal team has now distanced itself from her. She either has the proof or she doesn't. Some aren't waiting around to see.

A woman called into my radio show suggesting it was time for “patriots” to do what the left has been doing and burn the country down. What the extremists on the left have been trying to do is destroy the country. Patriots—real patriots—should be trying to preserve it. You don’t preserve a nation by burning it down. Yes, I’m well aware of Thomas Jefferson’s quote that “the tree of liberty must be refreshed from time to time with the blood of patriots and tyrants.” Jefferson also meant that as a last resort.

This election process is not yet over. Lawsuits and recounts are as much of the process as the actual voting. If your side feels as if the election were not fair, they have the right to bring their grievances to election officials, and, if necessary, take their case to the courts. The highest court in the land, the Supreme Court, should now be beyond question to conservatives. With Amy Coney Barrett on the bench, the constitutionalists should expect a reasoned opinion from six of the justices. Since John Roberts has been questionable in recent decisions, they should at least expect five voices of reason. That’s a majority. If President Trump’s case reaches the Supreme Court, which it’s likely to do, and at least five justices don’t see enough evidence of voter fraud to overturn the results of the election then it’s over. There should be no blood in the streets. This is how our system works. If you truly believe that conservatives such as Clarence Thomas and Samuel Alito are in league with the left to steal the election then you are the textbook definition of a zealot.

It’s time to end zealotry and let the process play out. At the end of the process we’ll have the next president of the United States, and the republic will survive.

Posted by Phil Valentine Show at 7:17 AM