I must confess to a renewed interest in the Democrat debates ever since Mike Bloomberg got in. No, I don’t think Bloomberg is the least bit interesting. What I enjoy is seeing the other candidates freak out over him. Like Elizabeth Warren in their first meeting in Vegas. They were back at each other in South Carolina. This time Warren retold the debunked story of losing her job as a teacher because she was pregnant and then accused Bloomberg of telling a pregnant female employee to “just kill it.” Bloomberg vehemently denies it, but no one wanted to call Elizabeth Warren on her lie of being fired because she was pregnant. 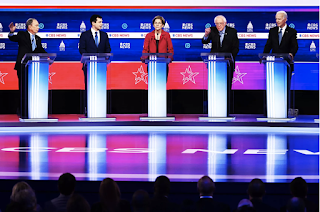 Minutes from a 1971 meeting of New Jersey’s Riverdale Board of Education show that Warren actually resigned, and her resignation was “accepted with regret.” Yet she still stands by the story to this day, just like she stands by the story that she’s an American Indian. She’s not. CBS News, which hosted the debate, “fact-checked” Warren’s story and found it to be “mostly true.” However, they used as their source Elizabeth Warren. They simply dug up other instances where she told the story to see if they matched. Interestingly enough, they didn’t. In 2007, she told an audience at Berkeley that she was working on an ‘emergency certificate.’ She went on to say, “I went back to graduate school and took a couple of courses in education and said, 'I don't think this is going to work out for me.' I was pregnant with my first baby, so I had a baby and stayed home for a couple of years.” That’s a far cry from being fired because you’re pregnant. Why did CBS News label it “mostly true?”


The unwillingness of the mainstream media to call these Democrats on their lies is journalistic malpractice. Joe Biden bragged on the debate stage in South Carolina that he had beaten the NRA twice and would take on the NRA again, along with the gun “man-a-factures” and win because their guns had killed 150 million people since 2007. CBS News “fact-checked” his statement about taking on the NRA and labeled it “mostly true,” yet they totally ignored his lie about 150 million people killed since 2007. The truth is, on average, 40,000 people are killed by guns each year. About 60 percent of those are suicide. Even if you include suicides the total number in the last 13 years would only total around a half-million, not 150 million. Heck, that’s half the population!

Tom Steyer is one of the biggest liars in the race. He’s been on a crazed crusade for years to save us from some sort of imagined climate catastrophe. At a town hall before the debate he took a question from a frightened little snowflake who confessed she was terrified of climate change. He then went on a tirade about how he would tell the car manufacturers what kinds of cars they could make. He would tell the builders what kinds of buildings they could build. He would declare war on the “fossil fuel” industry. (By the way, oil doesn’t come from fossils.) He then went on to blame climate change for childhood asthma and dirty drinking water in Flint.

The public needs to understand one thing. Even if you believe all this nonsense about climate change, CO2 has nothing whatsoever to do with dirty air and dirty water. There is no CO2 in smog. CO2 doesn’t cause tainted water in Flint. But did the mainstream media call him on that? Of course not.


Posted by Phil Valentine Show at 7:28 AM