In Mongolia they have a term for chaos in a cluster. If you’ve never been to Mongolia you’re in luck. It just came to Iowa.

The Democrats are in complete disarray. The Iowa Democrat Caucus looks like it was organized by Anonymous. It sort of was. This is the changing face of the Democrat Party. Two socialists are fighting off the last vestige of the old guard. It looks like bingo night at the retirement home. The chairman of the Democrat Party in Iowa is Troy Price who comes from the LGBT wing of the party. Remember those pirates in the movie Captain Phillips with Tom Hanks? That’s basically what’s happened to the Democrat Party. “Look at me,” the radicals of the party say. “I’m the captain now.” 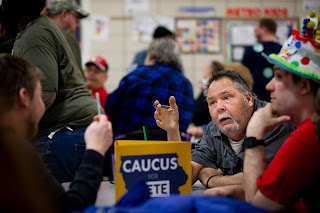 President Trump called Bernie Sanders a communist during a Super Bowl interview with Sean Hannity. He’s right. Elizabeth Warren? We’re generous if we call her a socialist. Joe Biden? He’ll be whatever you want him to be. He just wants to be president.


What would America look like with the Guy Fawkes party in charge? It wouldn’t look much like America, this I can tell you. Bernie and AOC have already joined forces to ban fracking in five years if they ever—God forbid—seize power. We are now the number producer of oil and gas in the world. That’s because of fracking. Take it away and we’re right back to being a net importer of oil instead of a net exporter.

It’s funny how liberals hate American oil but don’t mind so much foreign oil. Back when the fracking boom started people like Sen. Chuck Schumer wanted to shut them down while at the same time asking Saudi Arabia to up its production. It makes no sense.

Of course, Bernie and AOC are cut from a different cloth. They want to end oil production and importation altogether. They want to ground planes and ban gas-powered cars. Have you ever read the book or seen the movie Atlas Shrugged? In that movie all the planes are grounded by the moochers and looters and the only way to travel relatively quickly across country is by rail. The “loochers” are trying to get their hands on that too. Everything they touch turns to rust. In their quest for fairness they utterly destroy capitalism and the United States in the process. For people like AOC and Bernie, that movie has a happy ending.

Look at the mess that was the Iowa Caucus. Look at the utter chaos and disorganization there. Then ask yourself if you want the rest of the country to look like that. Now take a look at our country right now. Unemployment at historically low rates. Stock markets at historically high levels. An economy that’s firing on all cylinders. Trade deals renegotiated in our favor. Energy security. We’re no longer literally held over a barrel.

I can’t imagine the American people would look at all this and just ball it up and throw it in the fire over some pipe dream of a socialist utopia. There is no such thing as a socialist utopia. Just a socialist dystopia. You can see the future. Just pick up a copy of the third movie installment of Atlas Shrugged. Or, better yet, look south to Venezuela.