Is the 'Hands-free Driving' law a violation of your rights?

There are now 19 states that have passed ‘Hands-free Driving’ laws. Although they differ slightly in language, the aim in all is the same. Keep people’s eyes off their phones and on the road.

My opinion on the issue has evolved over the years. When cellphone bans were first talked about it was really a solution in search of a problem. Bluetooth was not in widespread use either, which would mean your phone would be useless as long as you’re mobile—sort of the opposite intended use of a mobile phone. 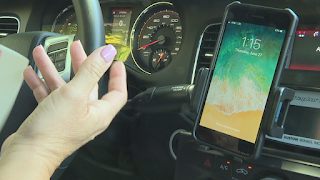 
Once the problem of distracted cellphone users reached the point of needing a solution I changed my opinion. That change has left me with the label by some as a big government neocon. That’s short for neoconservative, if you’re not familiar with the term. It’s a moniker that’s been applied to everyone from John McCain to Laura Ingraham, so I’m not sure how effective it is in dinging the recipient. But I received it in the spirit it was hurled. I get it. I understand why people are wary of new laws. What I don’t get is this leap of logic that supporting a ban on using your cellphone while you’re driving will ultimately lead to all of our guns being confiscated.

Some things are just common sense. When common sense ceases to be common you need laws. Look, I know some people who can hardly drive, let alone drive with a phone in one of the hands that should be on the steering wheel. I’m a big believer that your primary job when you hop behind the wheel of a car is to drive it. That may sound sarcastic but it’s not. I tell my kids that your one goal when you close that driver’s side door is to get from Point A to Point B safely. Everything else is secondary to that.

My wife loves to talk on the phone. She also hates learning new technology. It took this law to get her off the handset and onto Bluetooth. I think she’s going to find it immensely more convenient. I’m going to feel much better about her safety.

Which leads to a major point about driving. Safety is the most important issue on the road. Getting there takes a back seat to safety. Arrive alive. That’s the goal. It doesn’t matter how much faster you were than the other guy if you never make it. Too many people drive like it’s a competition. I have to raise my hand to that. Just this morning I had two people jockeying for position on an interstate onramp. One looked like someone’s grandmother. I don’t know where Grandma was going in such a hurry, but I got out of her way. A younger me may have been sucked into the competition.

Driving isn’t a race. It’s also not a right. You have to earn your way on the road by passing a test. That test doesn’t end when they issue your license. The daily test is safety. We’re all a little safer when everyone is watching the road.