Mayor Pete is NOT president-ready

What qualifies a person to be president? Interesting question. Pose it to a hundred people you’ll probably get a hundred answers. Most will say experience. That can either be in the business world, as in President Trump’s case, or political. What kind of political experience? Most of our presidents have first been governor somewhere. A few, like JFK, were senators. How about mayors? After 9/11 Rudy Giuliani was touted as a contender. They called him ‘America’s mayor.’ 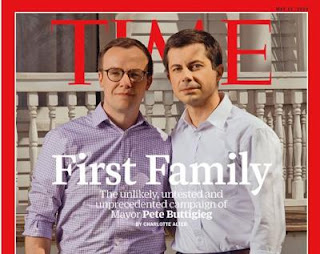 There was a talk show host who went on BSNBC and made this very point. The left came unglued calling him every nasty thing in the book. But it’s true. Mayor Pete is getting traction because he’s gay. Not that he doesn’t have a nice resume. Harvard. Pembroke. Oxford. Former naval intelligence officer. Impressive if he were running for re-election as mayor. He’s not. The 37-year-old darling of the left is running for president. Stop and think about that for a second. Do you think you’re qualified to be president? Me neither. Imagine the ego it takes to believe that you can go from mid-size-town mayor to the White House. That you’re even remotely qualified. That in and of itself is problematic. But there’s more.

Buttigieg (pronounced Boot-edge-edge) is for single-payer healthcare. In other words, government-run healthcare. He’s for more gun control. He’s for amnesty for illegal aliens. He’s for the insane Green New Deal which would bankrupt the country were it ever implemented. He’s called ‘climate change’ a national security issue, though he didn’t elaborate. He wants government-subsidized solar panels for every home. He’s totally against using fossil fuels (although I suspect he uses a ton of them on the campaign trail).

See what I mean? He’s no different from any other socialist out there except he has little real world experience in either politics or business. If he were straight he would be dismissed as a joke. So, is being gay some sort of qualification for being president? It would appear so, at least with a lot of people on the left. You can’t point to anything else that distinguishes him from any other mid-size-town mayor. That has to be it. And it’s not only sad, it’s rather frightening.

I thought we were supposed to not notice or care if someone was gay. That’s pretty much how I run my own life. I judge you on who you are, not what you are. Maybe I’m too radical for my time. If being gay is not supposed to matter then why does it matter in the case of Pete Buttigieg? That’s the point. It shouldn’t.

Don’t get me wrong. Buttigieg is impressive. Well-educated, military man, well-spoken. He just doesn’t have the experience to be president. Not to mention his politics are way too far left. Run for senate or governor, Pete. We’ll see you back here in twelve years.