Donald Trump is our only hope

I told you last week that President Trump had turned a corner with his State of the Union address. He is in full campaign mode, and no one is better on the campaign trail than Donald Trump. But the liberals are handing him ammunition. The Green New Deal is a dream come true for Trump. That’s why it’s so important in this moment of American history that we have someone like Trump in the White House. He is the clear delineation between capitalism and socialism. 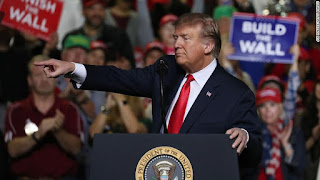 This is where the Democrats have been heading for a long time. It could be argued that this is where they’ve been for a long time. Tip O’Neill didn’t start the slide to socialism for the Democrats, but he’s emblematic of the bridge between the likes of Sam Rayburn and Nancy Pelosi. When my father was a Democrat in Congress in the ‘80s, people like Pelosi and Barney Frank were considered the left fringe of the party. Now they’re the middle of the road of the Democrat Party. They’re also being edged out by the more radical voices of Alexandria Ocasio-Cortez, Elizabeth Warren, and Kamala Harris.


Some are frightened of these radical new voices, and well they should be, but these voices also offer a clear contrast to capitalism in this country. Trump is capitalism personified. He loves this country. He knows what made it great. He’s an American success story. Had we even had someone as business-minded as Mitt Romney as president we wouldn’t have this clear distinction. Romney tends to be mushy on the important issues like illegal immigration and global warming. He would surely be compromising with the likes of AOC.

Trump understands his role in history. He is the bulwark against a total transformation of this country from capitalism that made it great to socialism that has failed wherever it’s been tried. That is the litmus test. Ask any proponent of AOC and socialism to cite any example—past or present—where socialism has worked. They can’t. The irony of all of this is they cry for taxing the ‘tippy top’ at 70 percent while Venezuela, which did exactly that, crumbles before our eyes.

Speaking of irony, Sen. Amy Klobuchar announced her candidacy for president and scolded the Republicans about the dangers of global warming in the midst of a blizzard. Of course, the people who spent decades telling us the earth was going to burn are now telling us the frigid weather is climate change. These are the same people who point to floods as climate change but were just telling us we were running out of water.

Any other Republican president would be buckling to the pressure from the radical global warming crowd. Not Trump. He made fun of Klobuchar’s announcement, and well he should. The liberals are fond of saying, “Speak truth to power.” Trump is speaking truth to liars. This Green New Deal would be a disaster for America. It would cut off the lifeblood of capitalism which is affordable energy. It would reward people who don’t work. It would cost the taxpayers trillions they don’t have.

Global warming like Occupy Wall Street and myriad other left-wing causes are merely vehicles to destroy capitalism and give rise to socialism. Socialism is complete government control. If you don’t know what that looks like remember this. The Nazis were socialists. Like I said, socialism has been tried many times before and failed.

Trump is now above 50 percent in approval. He is what stands between us and another Venezuela. Our only hope is that he prevails.