Trump was right about California wildfires

I’ll be the first to admit that President Trump’s tweet about forest management in the midst of a wildfire catastrophe was not the most artful thing to do. However, it doesn’t change the fact that he’s right. Governor Jerry Brown blames ‘climate deniers’ for the devastation. The truth is he had a chance to minimize the destruction, but he chose instead to bow to extreme environmentalists.

It’s instructive to understand what causes wildfires. It’s not spontaneous combustion because the earth is warming. An estimated 90 percent of wildfires are caused by humans. This includes campfires left unattended, cigarettes being tossed out of automobiles, and arson. The remaining ten percent are caused either by lightning or lava. The environmentalists will claim that wildfire devastation is exacerbated by drought. That’s certainly true, but California’s droughts these days are mere blips compared to historic droughts. 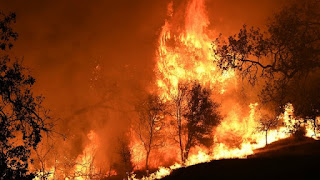 Scott Stine is a professor of geography and environmental studies at Cal State East Bay. He told the Mercury News, “We continue to run California as if the longest drought we are ever going to encounter is about seven years. We’re living in a dream world.” There have been multiple droughts over the last 1,000 years that have lasted 10 to 20 years. There was a drought around 850 AD that lasted 240 years. After a 50-year respite, another one lasted 180 years.


Contrary to what the alarmists tell you about this being the driest time in California’s history, Professor Stine says the past century has been among the wettest in the past 7,000 years.

Perspective is what so many knee-jerk environmentalists lack. They get locked in a world they can only remember, or a world that goes back to when the first records were kept. That’s a tiny world compared to the big picture. The longest droughts in recent California history occurred between 1928 and 1934, and another between 1987 and 1992. The problem is as more people overbuild California the property loss is naturally going to be greater.

Here’s why President Trump is right when he tweeted, “There is no reason for these massive, deadly and costly forest fires in California except that forest management is so poor.” The policy from the U.S. Forest Service used to be quite simple. When a forest became too difficult to walk through it was thinned. They cut out underbrush and made space between large trees. Strategic logging was employed that not only made the forests less prone to wildfires, it actually made the Forest Service profitable. This all began to change in the ‘70s and accelerated during the ‘90s under President Bill Clinton. The Rio Earth Summit was the big turning point where prevention of forest management kicked into high gear and war was declared on the timber industry.

The Roadless Area Conservation Policy directive put a stop to nearly all logging and roadbuilding, not to mention coal, gas, oil, and other mineral leasing on 58 million acres of land. President George W. Bush tried to reinstitute common sense forest management but was stymied by a federal judge.

Rep. Tom McClintock (R-CA) told Canada Free Press that the forest service used to auction off national forest timber. He said this not only saved the forests, it helped the local economy. That has “all but dried up,” he said.

And Jerry Brown vetoed a 2016 bill that passed unanimously in the California Assembly and Senate that would’ve given locals more say-so when it comes to fire prevention.

Liberal politicians continue to run California into the ground, and, in typical fashion, they always blame somebody else.

Posted by Phil Valentine Show at 6:53 AM