Unraveling the conspiracy at the FBI

I wrote in this space two weeks ago that what we were witnessing was nothing short of an attempted coup. Some thought that was simply hyperbole. Now we’re seeing the ugly underbelly of the entrenched bureaucracy in Washington, DC. 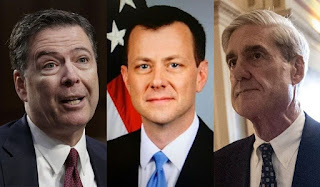 Peter Strzok, the now disgraced FBI agent who seemed to be trying to cook the presidential election last year, has been outed for the political hack he is. How he’s still employed with the Bureau is anyone’s guess. He sent a text message to his mistress, an FBI lawyer, regarding a comment she apparently made in Deputy Director Andrew McCabe’s office claiming there was no way Trump could win the election. “I want to believe the path you threw out for consideration in Andy’s office—that there’s no way he gets elected—but I’m afraid we can’t take that risk. It’s like an insurance policy in the unlikely event you die before you’re 40.”


What the “insurance policy” was is the subject of much speculation, but it seems obvious it’s the Trump dossier the FBI got from Fusion GPS, a company hired by Hillary Clinton and the Democrats to dig up dirt on Trump. Colluding with Democrats to bring down a sitting president is nothing short of a coup.

This calls into question the entire Mueller investigation. It’s all predicated on work done by the FBI, an FBI we now know had a political agenda. We’ll have to see where this leads us, but it appears Mr. Strzok and possibly others at the FBI may be guilty of treason and sedition. Those are serious charges but these are serious actions. If people inside the FBI were conspiring to remove Trump from office then what else would one call it? And we know Mr. Strzok was a Hillary partisan in charge of investigating her e-mail scandal. He changed James Comey’s now-famous statement regarding Hillary’s actions from “grossly negligent” to “extremely careless.” As you’ll recall, Comey let Hillary off the hook.

It was Peter Strzok who interviewed Hillary and her aides, Huma Abedin and Cheryl Mills. We know Mills and Abedin lied to the FBI, something that got Mike Flynn in a lot of hot water. Mills and Abedin skated. Why weren’t they prosecuted like Flynn?

The irony is the FBI launched an investigation to discover if the Russians colluded with Trump to influence the election when it was they who were doing the colluding and influencing. It was the proverbial fox guarding the henhouse. And what’s also ironic is the investigation that so many on the left have been cheering may very well be the investigation that brings down the Clinton machine within the FBI. It may also bring down Hillary herself.

Once we fully understand the lengths to which Hillary supporters inside the FBI went to get her elected, the appetite of the American people may very well change. It was Hillary who was colluding with a foreign agent to change the outcome of the election. Christopher Steele is a British citizen. Paying a foreign entity for opposition research in an election is against the law. It’s time the American people were told the truth.


Posted by Phil Valentine Show at 5:01 AM