The Roy Moore controversy should be time for all of us to do a little soul searching. Whether it’s Bill Clinton or Roy Moore, guilt seems to be related to political affiliation. Remember all of those Democrats rallying at the White House during Clinton’s impeachment? Al Gore claimed his boss would go down in history as one of our greatest presidents. 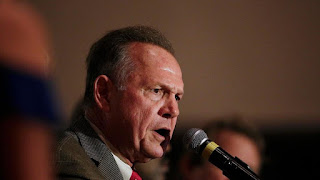 The impeachment wasn’t directly about sexual misconduct. It was about lying under oath about his relationship with Monica Lewinsky. “It depends upon what the meaning of the word ‘is’ is.” Remember? Clinton was being accused of sexual harassment against Paula Jones. Later Juanita Broaddrick came forward to say she was raped by Clinton. Still didn’t matter to the die-hard Clintonistas. Ultimately, he was never removed from office, and the accusations against him were certainly much more serious than those against Roy Moore.

Now the shoe’s on the other foot. Republicans find themselves in the unenviable position of defending a man who by all accounts was downright creepy. Dating 16 and 17-year-olds when you’re 32 might not be illegal in Alabama (the age of consent is 16) but it’s certainly worrisome. Reports from Gadsden suggest Moore may have been banned from the local mall during that period for trying to pick up teenage girls.

There are two more serious allegations, one involving heavy petting with a 14-year-old and sexual assault of a 16-year-old. Were these able to proven there would be no doubt that Moore should be disqualified from serving in the U.S. Senate. Even though the statute of limitations has run on those two incidents, the Senate would have cause not to seat.

But there is no proof, at least not at this writing. We all have our feelings about what may have happened. Our feelings are not relevant when it comes to the upcoming special senate election in Alabama. In fact, nobody’s opinion matters outside of those in the state who will have to choose.

I would hope we would all learn a lesson from this incident and develop some consistent standards when it comes to public officials, but I doubt that’s going to happen. My position has been to evaluate the evidence and make a determination based on facts. The Clinton impeachment was pretty straight forward. There’s no doubt that the president lied under oath, a clearly impeachable offense. The Constitution calls for impeachment in cases of “treason, bribery, or other high crimes and misdemeanors.” Bribery is a level 8 crime, according to the Department of Justice sentencing guidelines. Perjury, what Clinton was accused of, is a level 14 crime. I tried to explain all this to Lindsey Graham and the other House managers prosecuting the impeachment trial back in 1999 but that’s another story. Clinton subsequently lost his law license for essentially lying under oath.

Even to this day Democrats stand behind Bill Clinton, an indication that politics matters more than the truth.

When evaluating Roy Moore’s guilt or innocence one cannot ignore the timing. These accusations were from 40 years ago. Where have these women been? I’ve heard the excuse that they didn’t feel compelled until he was running for the Senate. Then where were they back in September when he was battling Luther Strange for the nomination? It seems rather curious that all of these accusations come a month before the special election when it’s too late to change the ballots. And hiring celebrity ambulance chaser Gloria Allred also sends up red flares.

The people of Alabama will decide. And that should be the final word.

Posted by Phil Valentine Show at 7:38 AM