Lessons from the VW scam

The car company that Hitler built may be coming to an end. No doubt, you’ve heard about the Volkswagen emissions scandal. Because of the conscious confusion of the global warming agenda there’s confusion over just what Volkswagen has done. Let me elucidate. They have admitted to rigging some of their “clean diesel” vehicles to fool smog tests. When the vehicle is hooked up to emissions-testing equipment the cars emit far fewer nitrogen oxides, which are major components of smog. Once the cars are on the open road, they emit far more nitrogen oxides than are allowed by U.S. law. Understand, this is real pollution, as opposed to the trumped up charges against carbon dioxide. 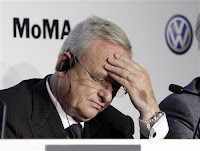 In an article from vox.com they stated the following: “While diesel cars get better mileage and emit fewer carbon-dioxide emissions, they also emit more nitrogen oxides (NOx), which help form smog, and particulate matter, which can damage lungs. Both types of pollution can have serious health effects.” (emphasis added) Here’s the problem. Carbon dioxide poses absolutely no health effect. Also, there is no CO2 in smog. I’ll repeat. There is no CO2 in smog. Al Gore and the global warming alarmists have cleverly conjoined CO2 and smog by shortening carbon dioxide to just “carbon” to make it sound sinister. CO2 is not a pollutant and, in fact, is essential to life on earth. It’s known as plant food.

The problem with Volkswagen is they weren’t trying to get around the CO2 regulations, which would’ve been excusable. They were getting around the smog regulations, which is inexcusable. They will be fined heavily and they should be. How heavily? Estimates are a minimum of $18 billion. To put that in perspective, VW’s pre-tax net income last year was roughly $4.7 billion.

This could mean an end to the car company Adolf Hitler started back in 1937. Hitler wanted an affordable car for the masses. The problem was even with his subsidy plan, few Germans could afford it. Then came World War II and production of the VW halted. It wasn’t until after the war, when Allied forces were inspecting a bombed-out factory, that the discovery was made of several VW prototypes. The Americans used Volkswagen as the centerpiece of their efforts to rebuild the German economy.

In 1959, an American advertising agency dubbed the VW the “Beetle” and an automotive phenomenon was begun. Twelve years later, VW surpassed the record set by Henry Ford and his Model T, selling more than 15 million vehicles. By the 1970s, the Beetle was looking tired and sales began to fall off. VW made a comeback in the ‘80s and in 2011 had built a production facility in Chattanooga, TN. The car company laid out about $1 billion. Federal, state, and local governments chipped in another $577 million in incentives.

That looked like a great deal to proponents of government welfare until the proverbial defecation hit the fan. Now Tennessee is scrambling to figure out what to do. What they should do is not defend the indefensible. As someone who has fought the misinformation of global warming for many years, I understand the problem of real pollution. In California, for example, vehicles account for about 60 percent of the smog. That’s a real problem. The way to address the problem is through cleaner-burning engines. The trick is dodging the CO2 requirements while making a cleaner engine.

In a perfectly combustible engine all you get is CO2. Perhaps the Volkswagen case will be a wake-up call. CO2 is not smog. It’s the alternative to smog.