Is it over for Trump now that he's taking the money?

After I watched Donald Trump’s recent rally in Mobile I turned to my wife and said, “I don’t think anybody can stop him.” I’m modifying that remark. There is one person who can stop him, and that’s Donald Trump. 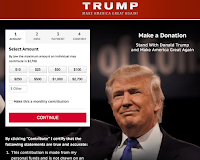 He came out of the gate like he was shot from a canon and blasted past the rest of the pack. The allure was confounding to the press but pretty easy to understand for the everyday American. Trump was so rich he was “unbuyable.” Special interests couldn’t buy him. Big donors couldn’t control him. What made him so attractive was the impression that he was going to shake Washington, DC to its core. He was an absolute phenomenon. It didn’t matter what he said. It didn’t matter what he’d said five or ten years ago. All that mattered was he was not a politician. He was immune to the mother’s milk of political campaigns.

He floated the idea of possibly taking campaign contributions. He suggested he may give the money to charity, which made no sense. Why take contributions in the first place if you’re not going to use them? You may as well tell the person contributing to give to their charity of choice. Then he said if he took any money he would only take it from individuals, not corporations. Then he said he would consider corporate contributions but there would be no strings attached. That’s what politicians have been saying for years.

When my father first ran for Congress back in the day, he said he wouldn’t put his own money in the race. The reason being, he said, was if he couldn’t persuade enough people to support his candidacy he had no business running. For a congressional candidate with limited resources that made sense. It makes sense for all the other candidates running for president. What made Trump’s candidacy so exciting was the prospect — and what turned out to be the illusion — that he was above the nasty business of fundraising. He didn’t have to beg for money. He wouldn’t be beholden to donors. He couldn’t be bought.

According to NPR, Trump has already taken $100,000 from a fellow developer who just happens to be his daughter, Ivanka’s, in-laws. There’s a donate button on his campaign web site and big money is reportedly rolling in. Is this problematic? I think it is. Not that he doesn’t have a right, just like every other candidate, to raise money. The problem is he set himself up as someone who was different. Someone who didn’t need the money. Someone who was “really rich.”

Trump now sloshing to the trough comes across as unseemly. It takes some of the shine off the apple. People naturally resent rich guys. Can you imagine if Mitt Romney had announced that he was “really rich?” Trump’s wealth is so off the charts that he’s in a different league, almost like royalty. He seemed to rise above even his own station in life, as if he were called to do something much more meaningful with his life than building things and employing thousands.

He seemed bigger than life, in part, because he couldn’t be bothered with the uncouth business of raising money for a political campaign. Then he bowed to the financial pressure, took the money and became a mere mortal again. Now he has to explain just what makes him different.