The real causes of the Civil War

I try to avoid this subject like the plague. People have been arguing over the cause of the Civil War since it began and the debate still rages. It's intensified in the wake of the Confederate flag witch hunt so I thought it was about time I chimed in. 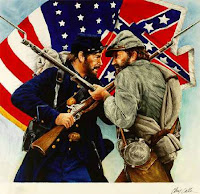 The causes of the Civil War are a bit complicated but they can be distilled down to a simple explanation. People look for a cause of the Civil War and that's where they make a mistake. There were two primary reasons for the war and it depends on which side of the Mason-Dixon line your perspective comes from.

First, let's get a nasty piece of business out of the way. The reason the Southern states left the Union was over slavery. That much is indisputable. People can point to all sorts of revisionist literature after the war but one only has to look at the Declaration of Causes of Succession from the seceding states. If you'll click on this document that reprints the declarations from South Carolina, Georgia, Mississippi, Texas and Virginia and do a word search for the word "slave" you'll find that word in some form 83 times in the document. There is no doubt the Southern states were upset over the North's abrogation of its responsibility to not only allow the South to continue slavery but to return any runaway slaves. They were also upset over the North's meddling and its attempts to foment a slave uprising. They were also mad that the North was trying to block the spread of slavery in the new territories. Georgia wrote in their declaration, "The prohibition of slavery in the Territories is the cardinal principle of this organization."

Mississippi wrote in their declaration, "Our position is thoroughly identified with the institution of slavery." South Carolina, the first state to leave, singled out Abraham Lincoln "whose opinions and purposes are hostile to slavery." They also laid out their grievances against states, by name, that had been increasingly hostile to the institution of slavery. Virginia noted as their reason for leaving "the oppression of the Southern slave-holding states."

But understand the distinction. The South seceded over the issue of slavery. Secession, in and of itself, didn't start the war. They felt they fully had the right to do so and never intended to go to war over it, although they were certainly prepared to do so, if necessary. After South Carolina left the union, federal troops occupied Fort Sumter in Charleston Harbor. Negotiations to convince them to leave the fort were unsuccessful and the Confederate soldiers took the fort by force, thus the start of the Civil War. Or, the War of Northern Aggression, if that's your perspective.

What needs to be noted is individual states were within their rights to dissolve their relationship with the federal government and leave the union. Lincoln and the North are portrayed as liberators of slavery but their interest was primarily in keeping the union together for financial reasons. They depended somewhat on the South for revenue. Although the North was far better off financially at the outset of the war, the Union found it necessary to implement the first income tax in 1862 to fund the war effort.

The South's export of cotton to the North was gone and they struggled to stay alive financially. Southern states printed money but a lot of folks didn't trust paper money unless it was backed by gold and the South had relatively little of it compared to the North. It was a lot like feuding band members whose individual parts are not nearly as valuable as the whole. Bullheadedness sometimes clouds good judgement and there was enough of that to go around on both sides.