The unions are at it again.  They’ve expanded the fast food strike from 20 restaurants in New York City to 200 nationwide.  Their complaint?  The same old tired refrain of a living wage.  They want $15 per hour.  The minimum wage is $7.25.

The truth is only a small percentage of restaurant workers make minimum wage.  Those are entry-level positions.  In fact, the restaurant industry is one of the easiest industries in which 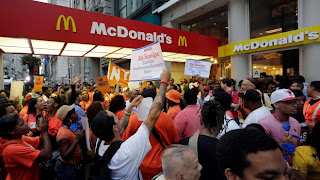 to advance.  One has to be willing to work hard, work smart and take on more responsibility.  That’s the problem with liberalism.  It’s never the liberal’s fault.  It’s always someone else’s fault.

Let me tell you something.  If you’re 50 and you’re making minimum wage at a fast food restaurant it’s your fault.  Barring some mental or physical handicap, if you’re trying to make a living off minimum wage you’ve made some bad decisions.

That’s the conversation few in this country want to have.  What is the root cause of poverty?  It’s impossible to say with certainty what the percentage is but it’s safe to say that most people are poor because of bad choices.

You may gasp at that notion but it’s true.  Let’s put it another way.  How do people get to be rich?  Trust-fund babies aside, people who become rich do so based on the choices they make.  Some may call it luck but Bill Cosby was once asked if he felt like he’d been lucky.  He said it’s funny but the harder he works the luckier he gets.

Fortunes aren’t made by happenstance.  They’re built.  That’s why it irks me when people talk about an unequal distribution of wealth.  Wealth is not distributed.  It’s earned.  If these folks striking at these restaurants really want to better themselves they need to get back inside the store and start making it happen.  Make yourself a valuable employee.  I’m not promising you’ll never get fired but I can assure you you’ll go a lot further in life than you will standing out in front of some restaurant holding a sign complaining that you’re not making enough money.

These folks standing outside of Taco Bell and McDonald’s have absolutely no ambition.  And they’re being brainwashed by union thugs who’ve convinced them they deserve a “living wage.”  They deserve to be fired!

Posted by Phil Valentine at 8:27 AM