We've turned a corner with this statue business

We have reached an inflection point in America. I warned many years ago that the Confederate monuments were just the appetizer. The main course was the founders of the country. Now we’re here. So, what do we do? 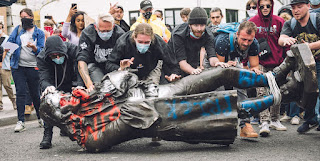 Just for full disclosure, I’m no fan of the Confederacy. I grew up in the South. We had a portrait of Robert E. Lee hanging over our fireplace. I get the heritage angle. I was just never very proud of a group of people who tried to destroy the United States as we know it. Yes, the Civil War was over more than just slavery, but anyone who tries to convince you that slavery wasn’t an issue or was simply a side issue is lying. Slavery is an ugly stain on our nation. I get why some people might be offended by monuments to generals who fought to preserve it.


I also understand why people want to preserve history. Forget heritage, preservation of history is crucial. It enables us to learn from it. What if we whitewash the Confederacy? Then no one will even know it ever existed. Isn’t it important that we understand why it did? I’m a big fan of building more monuments rather than tearing existing ones down. If there’s a piece of the puzzle not being told then let’s tell it.

Which leads me to Juneteenth. It was hilarious watching guilt-ridden liberal white folks falling all over themselves acting like they’ve always known about Juneteenth. I’d seen the word before, but I never knew what it was. All of a sudden banks were closing for Juneteenth, like they’d done it for years. Juneteenth was suddenly billed as an important holiday for black Americans. Funny, I don’t recall anyone insisting it be named ahead of Martin Luther King, Jr. Day. The truth is Juneteenth is not a very significant day. It’s a day when Texas slaves were finally informed that the war was over and therefore they were free. That was over two months after the war was over. But it didn’t end slavery. That didn’t happen until later in 1865 when the Thirteenth Amendment was ratified. That was on December 6. That’s a much more significant date in American history.

However, Black Lives Matter says Juneteenth is important so the guilt-ridden liberals fall in line. The only reason BLM said it was important was because President Trump had scheduled his comeback rally in Tulsa on the 19th. They were trying to contort a motive behind the chosen date, even though Tulsa is not in Texas. Didn’t matter. The woke media latched onto it and all of a sudden Trump was a racist for scheduling a rally on such an important day. The natural fawning by the media and corporate America predictably followed.

Then there was the “noose” incident at Talladega. Bubba Wallace, the only black driver, was outraged when a noose was discovered hanging in his garage stall. Had we been given the full story from the beginning we would’ve known this was a hoax. The “noose” was a pull for the rope that closes the garage door. It’s been there since at least October of last year. Only a hypersensitive liberal could see a garage door pull and think it’s racist. Before you know it we’ll be banning garage doors by association.

Just stop it. Everything around you is not racist and needs to be destroyed. If you have a problem with the founders then maybe it’s time to pack your bags. I’m drawing a line, which the liberals will probably misconstrue as a rope.