At war with socialism

This is almost like a war. We’re fighting socialism on so many fronts. One wave of the dreaded enemy is approaching from the west as California seeks to tax soft drinks, tires, guns, car batteries, even lawyers. Anything the socialists don’t like they tax. Another big battle front is in the southwest. The one at the southern border. They’ve penetrated our defenses with thousands of illegal aliens with an invasion wave designed to destabilize the country. And then there’s the east in Washington, DC. The socialist enemy has infiltrated the Democrat Party to the extent that they’re on the verge of taking it over, and with that they take control of the House of Representatives. 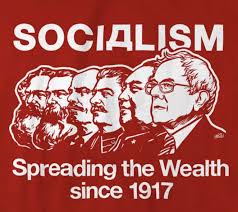 Their inroads into the Democrat Party are almost complete. Although Joe Biden still leads in the polls, he’s been badly wounded by the socialists’ planned attack on his character as some sort of sexual predator. Bernie Sanders, an unapologetically avowed socialist, is leading the pack of socialists who are gaining on him. He’s followed by other socialists like Beto O’Rourke, Kamala Harris, Elizabeth Warren, and Cory Booker. There’s hardly a declared candidate for the Democratic nomination who isn’t a socialist.

This should come as no surprise. For the first time since Gallup has been asking the question, more Democrats approve of socialism than capitalism. It’s no longer on the fringes. At least not in the Democrat Party. In fact, with Democrats socialism is now mainstream. What exactly does this new breed of socialists want?

They want greater control of corporations by labor unions. In fact, they want workers to control some of the seats on corporate boards. That particular idea is big with Elizabeth Warren. That assumes several things. It assumes that just by working for a corporation that you’re somehow entitled to help run it. It also assumes that you know what you’re doing. Putting a worker on a corporate board just because they happen to work for a company will lead to that board member most likely voting for things that will help the workers even if it hurts the company. Which misses the point of the company altogether.

Socialists believe companies exist to provide them jobs. They don’t. Nobody ever started a company with dreams of employing people. At least nobody who’s ever run a successful company. Let’s go back to the infant stages of one of our largest corporations. Take Amazon, for example. Jeff Bezos started Amazon in 1994 to sell books online. He saw an opportunity. People were driving to bookstores to browse a limited inventory. Bezos allowed you to browse the bookstore in your bathrobe with a virtually unlimited inventory that would be delivered to your doorstep. I doubt Bezos started Amazon with a socialist dream of employing hundreds of thousands of people. It just so happens that Amazon needs about a half-million people to do what it does. However, if Amazon can find a way to do some of the things it does without people it will. Its distribution centers are already using robotic technology to stock and distribute product. That’s because the goal of a company is not to employ people. It’s to make money for its shareholders. Think of it this way. If you were to start a business today what would be your goal? Exactly.

Workers are the beneficial side effect of business. If they ever become the primary focus then the company stops being profitable and fails. And guess what. Everybody loses their job.

Socialism is a failure and will always be simply because it does not understand that basic principle of business.