Mitch McConnell is the problem

If you are a fiscal conservative like me I’m sure you share my frustration with the latest budget that was passed by a Republican Congress and signed by a Republican president. Not to give President Trump too much of a pass, but he was obviously frustrated when he signed it. He did so, he says, because the six-month budget gets much-needed funding to the military.

What’s disturbing is the glee which Chuck Schumer and Nancy Pelosi took in voting for the bill. Any time those two are happy it’s a sure bet it’s a bad deal for America. But just who is to blame? 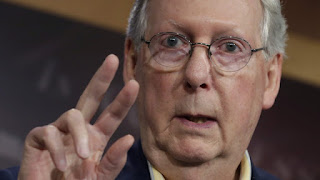 Many point to Speaker Paul Ryan who reached across the aisle to pass a bipartisan piece of legislation. Bipartisan sounds nice and fuzzy but it’s code for capitulation. The Republicans were sent to Washington to drain the swamp and stop the reckless spending. They failed miserably. And there’s one reason why. Mitch McConnell.

The senate majority leader has refused to kill the ridiculous filibuster rule. This is the arcane senate rule that allows the majority to threaten a filibuster and it takes sixty votes to override it. The minority never really has to actually filibuster. They just have to threaten to. Proponents of this insane rule claim that if the Democrats take control of the Senate they’ll dispense of it to pass their agenda if the Republicans do it to them. Fox News Alert: They’re going to ditch that rule the first time it gets in their way no matter what the Republicans do now.

Despite the spin from both parties, the filibuster super majority is not constitutional. The Constitution only requires a senate super majority when voting on impeachment, expelling a member of Congress, overriding a presidential veto, ratifying treaties, and proposing constitutional amendments. Requiring a three-fifths vote to stop a filibuster was a rule change in 1806, and even then was infrequently used until 1970. That’s when the Senate adopted the so-called “two-track” procedure intended to keep the filibuster from derailing all Senate business. It didn’t take too long before the actual filibuster itself became a mere formality and the Senate became a 60-vote institution.

My suspicion is McConnell actually wants a lot of the spending the Democrats want. Remember, McConnell is part of the swamp. This guy has become filthy rich thanks to the communist Chinese. As Peter Schweizer chronicles in his new book, Secret Empires, McConnell’s in-laws have deep financial ties to the Chinese government. China’s largest defense contractor set Elaine Chao’s family up in the shipping business. Elaine Chao is McConnell’s wife. She’s also the transportation secretary. Schweizer says McConnell’s father-in-law became filthy rich and gifted the senator between five and twenty-five million dollars.

Sounds rather swampish, doesn’t it?

What do you want to bet that an ordinary citizen like you or me wouldn’t get that sort of sweetheart deal from the Chinese government?

Trump’s tariffs on China are bound to be driving McConnell’s Chinese handlers crazy. Neither McConnell nor his wife seem to have any sway over the president on that issue. The Democrats focus on Russia but there is no doubt that China is the most dangerous country on Earth. And they have made our Senate Majority leader a multimillionaire. Can you say conflict of interest?