I’ve often said media bias is not what they tell you, it’s what they don’t. There’s no truer example than the Trumptap scandal. After President Trump tweeted that he’d been wiretapped by the Obama administration, the mainstream media had a meltdown. The same media that had been beating the drum of an unfounded Russia conspiracy derided Trump’s claim as “false” and “baseless.” The scary part is they all knew that it wasn’t. 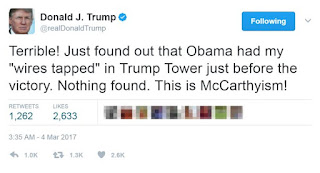 Something I noticed during last year’s campaign is the British news media are much more likely than the American media to report the truth about American politics. Three different news outlets in the UK were reporting, independent of one another, that a FISA warrant was requested on at least two occasions last year. FISA is the 1978 Foreign Intelligence Surveillance Act. It was designed to eavesdrop on foreign powers or those believed to be agents of foreign powers.

The British news outlets reported that someone either in Obama’s Justice Department or in the intelligence community went to the FISA court in June requesting a warrant to tap the information coming out of Trump’s campaign headquarters at Trump Tower. They named Trump specifically. That request was denied. One outlet says they tried again in July and were denied again. They all three agree that another attempt at a FISA warrant was made in October of 2016, just weeks before the election. This request did not include Trump as the target, rather it focused on individuals in the campaign. That request was granted and the subsequent inquiry turned up nothing.

The Washington Post’s so-called Fact Checker column was the only mainstream media outlet that even mentioned FISA. They determined that the three British outlets, including the BBC and a former member of Parliament, weren’t reliable enough. And that was that. By the way, Louise Mensch, the former Tory member of Parliament who writes for Heatstreet, is decidedly anti-Trump. One can only imagine that her reporting of the FISA warrant was meant to cast aspersions on Trump.

The Fact Checker column the day after Trump’s initial tweet was the only mention of the FISA court in the mainstream media. If you were watching CNN you got headlines like “Trump’s baseless wiretap claim” and “Trump untethered to facts.”

Predictable Democrat stooge, Sen. John McCain, said Trump’s claim was unprecedented. He said Trump was accusing Obama of “violating the law.” McCain knows full well that if Obama or anyone in his administration got a FISA warrant they were not violating the law. Their pretense for the warrant may be questionable, but the frightening prospect is a sitting president was using the intelligence community against a political foe. At the very least, that’s a gross abuse of power.

This issue should be quite simple to sort out. Take a look at the FISA applications for 2016. Apparently there were 10,700 of them between 2009 and 2015, according to ABC News. Only one was rejected entirely. There’s a pretty low bar when it comes to FISA approval. The fact that the probe against Trump was rejected (possibly twice) should help Trump’s case. Also, the fact that the one warrant granted turned up nothing should put the whole Russia controversy behind us.

The left-wing media don’t want to put that behind us. They want to milk it for everything it’s worth. They have managed to scare the American public with a complete non-issue. Finally Republicans have started fighting back by showing as many Democrats with Russians as anyone else.

The truth will set you free, but only if the media report it.

Posted by Phil Valentine Show at 6:54 AM