The real story about 'Russian hacking'

There's so much you’re not being told about the alleged Russian hacking of the Democratic National Committee (DNC). First of all, let’s get something out of the way. Nobody “hacked the election,” as the left-wing media are telling you. No vote totals were changed. No electoral votes were stolen. There are two separate hackings. There’s the DNC hacking that came to light last summer and got Debbie Wasserman Schultz fired as chairman of the DNC. Those e-mails showed her colluding with others inside the DNC and the Hillary Clinton campaign to ensure Hillary won the nomination. 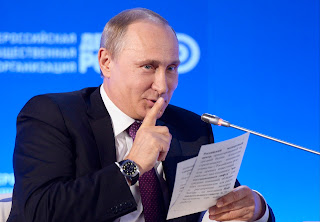 The other hacking is of John Podesta’s Gmail account. Podesta was Hillary’s campaign chairman. Podesta fell for a phishing scam that gave the hacker access to his e-mail. By the time the general election rolled around, the DNC hacks were ancient news. The only hacks that were in the news leading up to the election were the Podesta e-mails. The intelligence assessment makes absolutely no mention of the Podesta hack. Curious, isn’t it? The left-wing media have conjoined the DNC and Podesta hacks as if they’re the same. They’re not.

The report clearly states that it “does not and cannot include the full supporting information.” That’s because doing so would reveal that it was CrowdStrike, a company hired by the DNC, not U.S. intelligence agencies, that determined the DNC hacking came from the Russians. CrowdStrike is funded by Google, a benefactor that is neck-deep in Hillary donors and supporters. It’s the proverbial fox guarding the henhouse. In fact, the FBI says the DNC refused to turn over its servers for examination. The DNC says that’s not true. They say the FBI never asked for the servers. The bottom line is intelligence agencies never saw for themselves that the Russians hacked the DNC. They relied on propaganda, not intelligence.

In the “Sourcing” section of the report, they state their judgements are based on “our understanding of Russian behavior.” They do not source the actual DNC servers or computers because they never saw them.

Furthermore, the intelligence assessment of the hacks specifically states “we did not make an assessment of the impact that Russian activities had on the outcome of the 2016 election.” Nothing had more influence on the election than the Access Hollywood leak. That certainly cost Trump millions of votes. Nobody’s the least bit curious as to who was trying to influence the election there. It was Hillary’s campaign that kept trying to link Trump with Putin, and remember, it was a company hired by the DNC that came to that conclusion, not U.S. intelligence agencies.

Another interesting note is the report singles out the RT network (Russia Today) as a Russian “government-funded outlet.” They accuse RT of focusing on Hillary’s e-mails and accusing her of “corruption, poor physical and mental health, and ties to Islamic extremism.” In other words, reporting the truth is somehow criminal. Oh, and no mention that the darling of the left wing, Larry King, does a show on RT.

In fact, the bulk of the report focuses on RT as a propaganda arm of the Kremlin advancing issues like anti-fracking and pro-Occupy Wall Street programming. Couple that with the negative Hillary coverage and it sounds like the Bernie Sanders network. The report reads like an editorial from the New York Times. It’s long on hypothesis and accusations and devoid of facts and substance.


Everybody is focused on the DNC and the Russians while we should all be concerned about the real problem. Our U.S. intelligence agencies have been breached by partisan hacks.